Linguacious®, an award-winning Iowa-based company well known for its innovative audio-enabled vocabulary flashcard games in over 30 languages, has just released Book 1 in a new series of children’s books, Little Polyglot Adventures. The focus of the series is on helping kids appreciate the value of different languages and cultures. Volume 1, Dylan’s Birthday Present, is available in several languages, in both monolingual and bilingual editions. In every book in the series, children will learn new words in different languages. According to Victor D.O. Santos, PhD, author of the series, “our goal is to make the series available in hundreds of languages, including many endangered languages”. Volume 2 in the series, A Wild Day at the Zoo, will come out by October, 2020.

Dylan’s Birthday Present (Little Polyglot Adventures – Vol 1)
Dylan is an American boy like many others. One thing makes him special, though: his parents come from other countries and speak to him in different languages. It’s his birthday today and he receives a very unusual present, only to lose it shortly after. Together with his best friend Emma, a sweet bilingual girl born to South African parents, Dylan sets out to find his lost birthday present. During their search, the two multilingual and multicultural friends learn about the value of friendship, of speaking different languages, and of appreciating one’s own as well as others’ cultural and linguistic background. 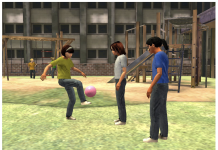