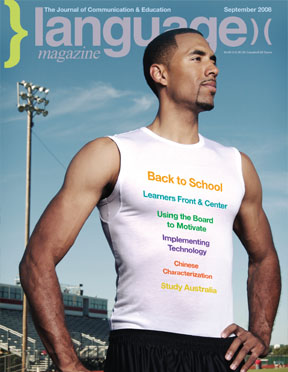 As the world’s most spectacular sporting event of all time draws to a close, the scale of the Beijing Olympics, and the commitment of its organizers continue to impress.

Five and a half million residents of Beijing can now speak a foreign language, up from just 3.2 million at the end of 2006, according to Liu Yang, the head of the Beijing Speaks Foreign Languages Committee, which was founded eight years ago, and entrusted with the task of “creating a good linguistic environment” for the Olympic games.

By the end of last year, the committee had organized six English language “park celebrations,” 701 “neighborhood study spots” and 433 “English corners” in which local students practiced rote-learned phrases with one another. They staged foreign language song contests, public speaking competitions and free tuition.

The idea, said Liu, was to turn Beijing into the “international city” it was always supposed to be. Although the campaign was spurred on by the Olympic games, efforts would proceed well beyond 2008.

The committee even helped to organize a foreign teacher recruitment drive, although strengthened visa restrictions in the run-up to the games appear to have hampered the initiative.

The Olympics does not create miracles, but it has inspired enthusiasm and investment. The 17-day sporting extravaganza represents the culmination of three decades of Chinese efforts to reconnect with the world, and enthusiasm continues to run high.

Long before the Olympics were awarded to Beijing, learning English was already high on the agenda. The forces that have driven the country to the brink of its biggest international event in history have also driven its people to embrace English, the lingua franca of global culture and commerce. The education system, at least in the cities, has followed the economy. But, interestingly, this program has been targeting average people (cab drivers, waiters, etc.) rather than the business elite.

As schools across this country start another year faced with budget constraints and painful cost-cutting decisions, we can be sure that our English learners will be among the hardest hit by these money-saving measures. California, with the most English language learners, has yet to agree a budget although more than $3 billion (about five percent of the state’s education budget) has been earmarked to help 8th graders improve their algebra, leaving schools full of uncertainty and confused about priorities.

What a stark contrast to the lavish expenditure on the Olympics and the billions of dollars that American companies alone pumped into the event. Of course, this expenditure is intended to produce a return on investment in the form of global brand building or some such marketing objective.

Were that expenditure invested in the education of our most disadvantaged children, would not the return on investment be even greater?