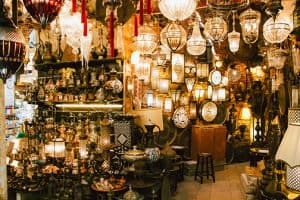 About the Turkish language

The earliest forms of the Turkish language were written in Orkhon script.

Atatürk introducing the new Turkish alphabet to the Turkish public.

However, in 1928, modern Turkey’s hero, Mustafa Kemal Atatürk, had changed many things about the Turkish language. He changed the writing system to a Turkish variant of the Latin alphabet (without the letters Q, W or X, and added the letters Ö and Ü from German, Ç from Albanian, Ş from Romanian; and also added the letters Ğ, I, and İ to represent certain sounds which weren’t present in any other Latin-based languages at the time), and replaced many loanwords with older or constructed Turkish words. The change of the writing system heavily benefited Turkey’s youth, and during the 1930s, the literacy rate shot up to 70%. Today, the overall literacy rate is approximately 87%, but the reason for the seemingly low literacy rate (for our time) has to do with personal family matters rather than any difficulty, even though it’s compulsory for all Turks to go to school up to the age of 16, so technically their parents are both breaking the law and depriving their children of a wonderful gift: knowing how to read and write.

A map showing the number of Turkish speakers by country.

In terms of number of speakers, Turkish is the largest Turkic language in the world, spoken by approximately 100 million people worldwide.

Turkish is the official language of Turkey and the Turkish Republic of Northern Cyprus, and is a recognized minority language in Kosovo and Macedonia.

There are also two million Turcophones in Germany, due to its very large Turkish minority living there; a slightly smaller minority living in Bulgaria; and also over 100,000 living in France, Netherlands, Belgium, United Kingdom, Austria, United States and Uzbekistan. There are also smaller Turkish-speaking minorities living elsewhere, most notably Greece, Russia, Canada and Azerbaijan*.

Standard Turkish is basically the Turkish spoken in Istanbul, which has no particular accent, and is spoken clearly, smoothly and slang words are non-existent.

However, Turkey is a place full of surprises and diversity, and many dialects of Turkish exist. Here are the most common:

So yes, there’s a variety of different dialects spoken by Turks, but don’t let that put you off, because most Turks, regardless of whether they speak standard Turkish or a certain dialect, will understand standard Turkish, as it’s the standard for all schools in Turkey and Northern Cyprus.

Many people whose native language is not Turkish complain that Turkish is very hard to learn. Turkish, being an Altaic language, has grammar and vocabulary that is very different from Indo-European languages. Learning Dutch for a Brit or learning Italian for a Romanian is much easier than them learning Turkish. On the other hand, there are similar languages to Turkish such as Mongolian or Kazakh.

Advantages of Turkish (for English)

The benefits of learning Turkish

Approximately 250 million people worldwide speak a Turkic language, Turkish being the most common. However, all Turkic languages have a very high degree of mutual intelligibility, therefore learning Turkish means you can speak to 100 million more people properly, and 150 million more roughly, but still understanding the basic gist of the conversation.

So, 250 million, that’s a lot of people, huh? Doesn’t that sound like good business and marketing opportunities to you? Trust me, Turkic countries aren’t as impoverished as you think. The West’s definition of poor is actually very exaggerated. Many, much poorer countries are still good places to do business. Take Africa, for example. At the moment African countries have the fastest growing mobile market in the world. When entrepreneurs hear news like this, they immediately appreciate Africa’s potential to generate lots of revenue in the mobile phone industry. As for Turkey, it’s richer and in better shape than most African countries, so financially you could do really well there. As a matter of fact, Turkey is a member of the G20, and is the 17th most industrialised country in the world. Turkey’s GDP ranks 17th, and has one of the fastest GDP growth rates in the world. Turkey has a developed services sector; a large, rapidly growing tourism sector; as well as construction, electronics, textiles and automotive industries which are very important to Turkey’s economy. So who says Turkey’s economy is bad?

Turkey and Northern Cyprus are also political hotspots, with many things going on in the Turkish parliament and politics. If you ever have to deal with Turkish or Turkish Cypriot affairs, learning the language would be highly beneficial.

On a much less serious matter, Turkish is a very beautiful-sounding language. Turkey and Northern Cyprus are actually incredibly beautiful places themselves, and are definitely worth visiting, so knowing the local language would be very useful.

There are many languages related to Turkish in the Turkic family. Of these, Wikibooks of the following languages are available.