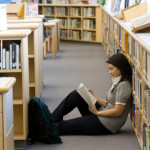 In a move supported by Language Magazine, a coalition of more than 20 education businesses, associations, and media groups has called on the U.S. Congress to support dedicated school library funding in the reauthorization of the Elementary and Secondary Education Act (ESEA).