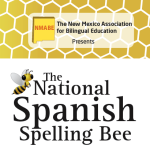 Five hours and 18 rounds after the competition began, Alexis Gutierrez, a seventh grader from Hagerman Middle School was crowned champion of the 22nd Annual NMABE State Spanish Spelling Bee sponsored by the New Mexico Association for Bilingual Education (NMABE), the National Hispanic Cultural Center, the Spanish Resource Center and Santillana, USA. The first through fifth place winners are now eligible to compete in the Fifth Annual Santillana, USA National Spanish Spelling Bee which will be held on Saturday, July 18, 2015 at the National Hispanic Cultural Center. NMABE began the Spanish Spelling Bee in an effort to promote bilingualism for all children in an environment that nurtures the rich cultural and linguistic diversity of the state of New Mexico, and continues to promote the event throughout the Unites States.