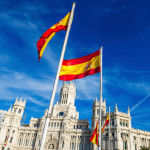 Last month at the San Ildefonso College in Mexico City, Spain’s King Felipe VI and Queen Letizia launched the Siele, or the International Service for Evaluation of the Spanish Language, which is set to be a globally recognized Spanish language certificate encompassing the diversity of the language from all Spanish-speaking countries. “If we want to reaffirm Spanish as the world’s second language, we have to move beyond a short-term, self-self-absorbed vision and pool everyone’s resources to achieve a goal that will benefit us all,” said King Felipe VI of Spain in a speech during the king and queen’s official visit to Mexico where they championed the Spanish language as an engine of growth for the entire Spanish-speaking world. The test will determine a student’s Spanish skills, and can be administered practically anywhere on the planet.

The initiative was jointly developed by Spain’s Cervantes Institute, which has 90 centers in 44 countries, by the National Autonomous University of Mexico, and by the University of Salamanca, which are, respectively, the largest and the oldest centers of higher learning in the Spanish-speaking world. The test will first be administered at the beginning of the next academic year, and a minimum participant count of 300,000 candidates annually is predicted, growing to 750,000 in five years. “We were missing a flexible, highly respected certificate of proficiency in Spanish as a foreign language along the lines of those offered for the English language,” said King Felipe in his speech. The new certificate will be available on five continents, but the greatest effort will be focused, until 2018 at least, on three countries: Brazil, with 120 test centers, the United States with 100, and China with 60. More than 15 million people are currently studying Spanish in those three countries alone.

The Siele will have four sections: reading, listening, writing and oral expression. The candidates’ efforts will be evaluated by accredited experts, and applicants may choose whether to take all sections at the same time or to break them up. Results will be available within three weeks of taking the examination and successful candidates will receive a certificate with a two-year expiration date. The test is part of a broader project aimed at advancing Spanish-language education in all of its diversity. “The Siele is not just an evaluation, it is also a way to promote Spanish, and by that we mean everyone’s Spanish, with everyone on an equal footing,” said the head of the Cervantes Institute, Víctor García de la Concha. “We want all 900 Ibero-American universities and all education ministries to participate in this project.”