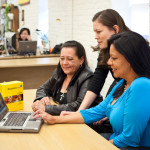 Only a small portion of the world’s 7,000 languages have extensive written records. Those that are the least well-documented are the most in danger of disappearing. Due to European contact, through wars and disease, sharp decreases in language communities severely endangered many native languages and as less children on the reservation were homeschooled, the link between remaining native speakers and their children weakened. In 1930, an effort began to document the language of the Chitimacha tribe, which had only two remaining fluent speakers; Benjamin Paul and Delphine Ducloux. A linguist at the time, Morris Swadesh, worked with Paul and Ducloux to document the Chitimacha language’s linguistic diversity. After the death of the two remaining speakers, the language went through 60 years of silence until the early 1990’s when the Chitimacha tribe gained access to Morris’ linguistic documents.

In 2008, after some members of the tribe began excavating Morris’ sources, the Chitimacha tribe partnered with Rosetta Stone to create computer software for learning the Chitimacha language. Today every registered member of the tribe has a copy of it, and a dictionary is in the works. The Chitimacha language is now used in classes and the Chitimacha reservation in Lousiana recently launched a preschool immersion program to educate the next generation of speakers. With 96% of the world speaking roughly 4% of known languages, reviving lost languages and providing resources and community for minority language speakers is empowering to both individual cultural identity and collective linguistic knowledge.

Image source: Daniel W Hieber; published on The Conversation; Members of the Chitimacha language team (from left to right) Sam Boutte, Kim Walden and Rachel Vilcan use the new language software for the first time.