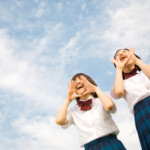 It is a long established characteristic of natural human language that the relationship between the sounds that make up a word and the meaning behind that word is arbitrary. Since Swiss linguist Ferdinand de Saussure postulated the arbitrary nature of signs the nonexistent relationship between signifier and signified was considered a universal property of human language. The onomatopoeia is often sited as an argument against Saussure’s idea because these words directly represent their meaning through sound. In a recent study, titled Iconicity can Ground the Creation of Vocal Symbols, a group of linguists examined this relationship between sounds and words in a laboratory setting.

Researchers asked students at the University of California Santa Cruz (UCSC) to create new words for 18 contrasting ideas: up, down, big, small, good, bad, fast, slow, far, near, few, many, long, short, rough, smooth, attractive, and ugly. In pairs, the students would guess the meaning of each word based only on their sounds. No bodily gestures or facial expressions could be used when delivering the word to the student who would guess the meaning.  The students were successful in guessing the meanings and improved with experience. Analyzing the data, author Marcus Perlman, a cognitive scientist at the University of Wisconsin, Madison and lead author of the study, said the guessers were successful because the inventors consistently used certain types of vocalizations with certain words, linking ideas with acoustic labels.

The study was an extension of the Baoba/Kiki effect, which was originally proposed in 1929 and further tested in 2001. The Baoba/Kiki effect examined the relationship between signifier and signified by asking students, one group of English-speaking college students and another group of Tamil-speaking college students, which of the following shapes they would name “Baoba,” and which they would name “Kiki.”

Over 95% of both groups labeled shape A as “Kiki” and shape B as “Baoba.” This suggested some type of relationship between the sound of a word and what that word represented, meaning the sounds of language and language evolution are not entirely arbitrary. Perlman told Science Magazine, “It’s interesting to me that people are so consistent in their ideas of how to express these different meanings. [Students playing the game] are nervous at first, and they don’t have any idea of how to express these meanings the first time through. But, lo and behold, they are actually very consistent in what they do. They all share similar intuitions.”

These similar intuitions could simply be cultural understanding. The study was conducted among English-speakers of a similar background. When Perlman ran a similar study in rural China, the results were close, but not identical. Instead of using higher pitches for smaller objects and lower pitches for bigger objects like the English-speaking students did, the Chinese-speaking students did the opposite. Perlman suspects that this is related to the use of high-pitched tones to convey strength and power in Chinese folk performances, showing how cultural influence and already speaking a language hinders the study.