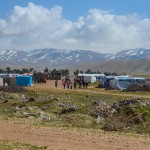 NaTakallam (we speak Arabic) is a new platform aimed at providing employment for Syrian refugees in Lebanon through teaching remote classes to Arabic language learners. Over 25% of registered Syrian refugees reside in Lebanon, now making up over 20% of the country. However, refugees lack the same rights as Lebanese citizens and face many legal restrictions that bar them from work. “There’s this whole group of middle-class Syrians who were really on their way to completing their degrees – who might have had small businesses – a whole group of people that are also really in need of support,” NaTakallam co-founder Aline Sara told WorldPost.

The goal of the platform is not only to provide opportunities for Syrian refugees, but to allow Arabic language learners to absorb and practice colloquial Arabic. “Frequently, people who study in the United States will go to Jordan, to Lebanon, and they’re speaking pretty much a Shakespearean version of Arabic,” Sara explained. “There’s an increase in demand for the spoken version of the language.” If the pilot version of NaTakallam is successful, the team aims to expand their reach. “We’re already looking into other countries with big Syrian communities,” Sara said. “We would love to expand both to other nationalities and other countries with refugee communities.”