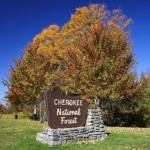 A large concern for minority languages turning to mobile phones and the internet is the production and maintenance of quality content. “What does having this information available on the Internet mean to Cherokee speakers, Cherokee language learners and the Cherokee community?” Hartwell Francis, the director of WCU’s Cherokee language program, asked during a talk on Cherokee language in the digital age. “You have essentially useless, overproduced word lists that are potentially incorrect, often a list of colors or an alphabet,” Francis said. “You can see how limited it is,” he continued, pulling up one such site, where you type in the English word and it spits out the Cherokee syllabic pronunciation for its equivalent. “Language is words being put together in a meaningful context. It puts a severe bottleneck in your language learning if you have to type in word by word.” Still, any interaction with the internet means the creation of a meaningful digital archive.