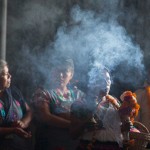 The first Mass conducted in Mexico’s most prominent indigenous language, Nahuatl, was held in the country’s most important church, the Basilica of Guadalupe. Nahuatl is a living language, although its best-known form, Classical Nahuatl, which was a lingua franca in Mexico in the 16th century, is long extinct. Modern Nahuatl is currently spoken by an estimated 1.5 million Nahua people who live mostly in Central Mexico.

Roman Catholic Bishop Felipe Arizmendi said during his homily in Mexico City that rather than accept and respect the culture of the country’s original peoples, they have been scorned. He pointed out that Nahuatl was the language of Juan Diego, the first indigenous saint, who Catholic tradition says saw the Virgin of Guadalupe nearly 500 years ago. Pope John Paul II canonized Juan Diego in the same basilica in 2002. Arizmendi spoke in Spanish with a Nahuatl translator to assist him, telling the congregants that God wants to speak to them in their own language.