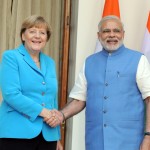 India and Germany resolved the sticky German language issue during Chancellor Angela Merkel’s visit last month. Once again, students in Kendriya Vidyalaya schools (KVs) will be able to opt for German as an additional foreign language in conformity with the National Education Policy, the Union Ministry of Human Resource Development announced after signing a joint declaration of intent with Germany.

Through collaboration between Max Mueller Bhavan and the Kendriya Vidyalaya Sangathan, German as a foreign language will be promoted in India, and modern Indian languages will be taught in Germany. The Ministry of Human Resource Development’s earlier decision to discontinue the teaching of German in KVs had escalated into a diplomatic row, with German Chancellor Merkel raising the issue with Prime Minister Narendra Modi at the G20 summit in Brisbane last year.