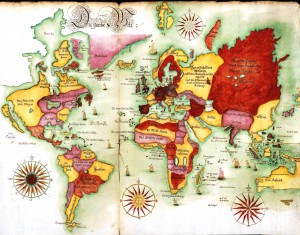 African culture and language has had a massive influence over Latin American, South American, Caribbean, and other Spanish-speaking countries not only culturally (from Samba to carnivals), but also linguistically. Language Magazine rounded up ten Spanish words that come from African roots.

Marimba–a cognate that refers to a beating in the southern cone of South America.

Mucama–used for maid or servant in Uruguay, Argentina, and Brazil.

Congo–used in Latin America for a term for a black man/woman, presumably stemming from the country Congo.

cachimbo/a–used for pipe in Latin America, a term for a poor man/woman in the Caribbean, and solider in the Andes.

Merengue–used to refer to the music and dance, along with meaning mess in the southern cone, and wimp in South America.

Mandinga–used for devil, evil spirit, and goblin in Latin America, black in the Caribbean, and effiminate in the south cone of South America.

Mondongo–Spanish word that means guts, and is often used as a word for tripe.

Chévere–used as a term or phrase for fantastic or great in Latin America.

Original reference from “A History of Afro-Hispanic Language” by John M. Lipski of Pennsylvania State University published by Cambridge University.