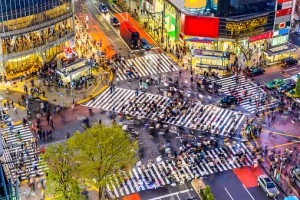 Language was the at the center of the Tokyo Skytree earthquake evacuation drill at the popular tourist landmark in Tokyo’s Sumida Ward. The exercise took place on the high observation deck at the Skytree—Japan’s tallest building—in preparation for an earthquake hitting during the 2020 Japan Olympics and Paralympics.

According to The Asahi Shimbu, around 115 foreigners acted as tourists on the viewing deck on the fourth floor, and followed directions provided by compact wearable translation devices used by officials. The devices are expected to speed the evacuation rate for foreign tourists, and can translate spoken Japanese into messages in English, Chinese, and Korean. Officials could ask tourists questions like, “Are you thirsty?” in spoken Japanese, and have the message translated into the three languages.

Other translation methods were used, such as audible translation over loudspeakers of directions on where tourists should gather into English, Chinese, and Korean. The disaster preparedness is looking forward to the 2020 Olympics, when Tokyo is expecting an influx of tourists. The Tokyo Metropolitan government has issued a Disaster Preparedness Manual that is available in English in the hopes of informing tourists what to do in the case of an Earthquake.

In 2012 experts at Tokyo University  stated that Tokyo has a 98 percent chance of a magnitude 7 quake hitting within 30 years. The number has now been estimated at around 70 percent, however, Tokyo isn’t taking any chances, and is making sure that whether visitors speak Japanese or English, they can be prepared.