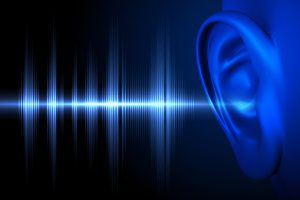 According to a new study, toddlers who spend a lot of time in noisy environments may have a harder time learning to speak, because background noise—especially the kind that comes from voices on the television or radio—can make it tough for young children to learn new words.

To understand how background noise influences language development in toddlers, study co-author Brianna McMillan of the University of Wisconsin-Madison and colleagues did three experiments with a total of 106 kids ranging in age from 22 to 30 months.
In each experiment, toddlers listened to sentences featuring two new words. Then they were shown the objects the words identified. Afterward, researchers tested kids to see if they remembered the new vocabulary.
In the first experiment, 40 kids aged 22 to 24 months heard either louder or softer background speech when learning the new words. Only toddlers who were exposed to less background noise successfully learned the new words, according to a report online July 21 in Child Development.
Then, researchers repeated the experiment with a different group of 40 children who were slightly older—28 to 30 months. Again, kids only absorbed the lesson when there was limited background noise.
For the third experiment, kids heard two new words in a quiet environment. Then they were taught the meaning of these words as well as two additional words with the same level of background noise that had impaired learning in the previous experiment.
The children in this last situation only learned the new words and their meanings if they had initially heard the new vocabulary in the quiet setting. This suggests that hearing words in a quiet environment without distracting background noise, may help children learn, the authors conclude.
One limitation of the study is that researchers only exposed children to one type of background noise, which might mean the results would be different in other environments, the researchers note.
The findings are consistent with other research on language development that has found background noise can inhibit language development. A 1994 study by Dr. Carl Crandell, professor of audiology at the University of Florida, revealed that ambient classroom noise negatively affects sentence recognition of English language learning (ELL) children significantly more than those of native English-speaking children.
The study revealed that with little or no classroom noise, both native and non-native English-speaking children achieve equivalent word recognition scores. However, as the voice-to-noise levels drop below six decibels, the non-native English-speaking children’s sentence recognition scores become significantly poorer than those of native English-speaking children.
At voice-to-noise ratios below plus six decibels, the ELL children were severely impacted in their ability to discern the key sounds (soft consonant sounds in particular) necessary for achieving adequate word recognition. ELL children seated more than nine feet from the teacher struggled to understand a significant portion of the information presented by their teacher.
In addition, quantitative measurements have revealed that average voice-to-noise levels in elementary and secondary schools range from +8 dB to -8 dB depending on where a child is seated relative to the teacher. This clearly means that ELL children will not be able to hear adequately in class and will be unable to achieve their potential without some type of intervention strategy. Classroom audio is an effective intervention strategy, improving word recognition of ELL children by 20 to 30%.
In a separate 1994 study, Dr. Crandell tested classroom audio technology as an intervention strategy for ELL children. The study showed that classroom audio technology significantly improved speech perception of non-native English-speaking children. Crandell studied the amplified and unamplified speech recognition of ELL children at various speaker–listener distances. Prerecorded monosyllabic word lists played unamplified through a KEMAR mannequin, then amplified with classroom audio technology.
At distances beyond twelve feet from the teacher, classroom audio significantly improved word recognition for the ELL children. The 83% versus 79% score at six feet may have been an anomaly due to playing the word lists through the mannequin. Also, based on the previous study, it is likely that a substantive disparity in scores would have probably started to occur around nine feet from the teacher.
Noise measurement in occupied kindergarten classrooms can range from 65 to 75 decibels (dB); occupied elementary classrooms can range from 55 to 65 decibels. At these noise levels, ELL children seated nine feet or more from their teachers will be substantially impaired in their ability to accurately perceive words and sentences spoken by their teachers . No matter what the noise level of a given classroom, classroom audio helps word recognition for children learning English.