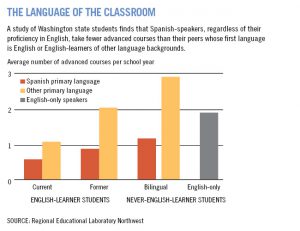 Education Northwest along with the Institute of Education Sciences and Regional Educational Laboratory at Education Northwest analyzed the patterns of advanced coursework among Spanish-speaking students, other language minority students whose primary/home language is a language other than Spanish, and English-only speakers.

On average, Spanish-speaking students enroll in half as many advanced courses per year as English-only speakers. However, bilingual students on average have the highest grade point averages and take more advanced courses than all other groups.

A key finding of the study was that Spanish-speaking students attended schools that offer less advanced courses.