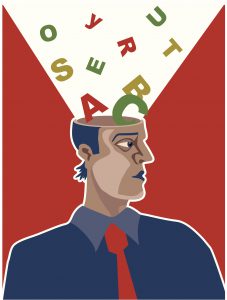 The English language has progressed over time without a handbook or guidance, so one would think that the structure within the language would be nonexistent. A new study, however, proves otherwise. The study, by Kristian Berg of the University of Oldenburg and Mark Aronoff of Stony Brook University is titled “Self-Organization in the Spelling of English Suffixes: the Emergence of Culture Out of Anarchy.” Berg and Aronoff found through investigation that suffixes in the English language are “quite consistent” which led to a system that emerged as a result of self-organization without explicit regulation.

English spelling is a complicated matter. It is often-times unphonetic, and has many words that sound the same, yet are spelled in wildly different ways. Furthermore, as no nation or authority owns English (The U.K. and U.S. have no official language), speakers are permitted to use and manipulate the language in any way they please, whether it is making up words or spelling words in a new way. Perhaps to the surprise of “spelling police” on the internet, there is no official body that governs how English is spelled, and many words are spelled differently depending on the country of origin (color and colour come to mind).

Even though there is (and never has been) an official authority governing the progression of English and meaning of English words, researchers still found that English functions in an organized matter. Berg and Aronoff concluded, then, that the English language organized itself organically throughout and can give English readers cues through spelling and suffixes about the meanings of certain words.

Some examples of suffixes that give readers morphological information include:

• <ous> signals that the word is an adjective. There is a very clear, almost complementary

if it does not end in <ous> (but phonologically ends in [ɨs]), it is not an adjective

• <ic> also marks words as adjectives, although the distribution is not as unequivocal.

not end in <ic> (but phonologically ends in [ɨk]), it is (with one exception) not an

• <al> signals that the word is an adjective or a noun; at the same time, there are frequent

conversions between them (e.g. <capital>). Words that do not end in <al>

(but phonologically end in [ɨl]), by contrast, are either nouns or verbs (but not adjectives)—and again, we find frequent conversions between these categories (e.g.<model>).

• <y> signals that the word is probably not a verb; words that do not end in <y> (but

phonologically end in [i]) are probably not adjectives. Words that end in <i> are

The emergence of language-made structures within the English language sheds light on the history of the language, and gives further proof that English is both lexical and morphological. Historically speaking, there were alternate spellings for the same word. For example, Queen Elizabeth had a single spelling for only half of the words that she used within her correspondents. Still, her spelling usage was not without systems, and many of the words had only two variants. Over time, these variant spellings of the same word became fixed, depending on the context that the word was being used. Still, there were no hard and fast rules for why the word was spelled a certain way, and thus the title of the study is explained. While the English language now has distinct times when variant spellings of the same word are present, the reason that they are used in that manner comes not from hard and fast rules, but from a self-organized structure that was born out of linguistic anarchy.