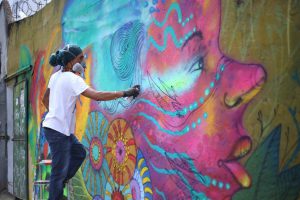 Changing the World, One Wall at a Time is a new documentary on Education Is Not a Crime—the world’s largest street art and human rights campaign, which raises awareness about education apartheid by Iran’s government against tens of thousands of Bahá’ís in the country through murals.

The film, produced by Iranian-Canadian journalist Maziar Bahari, features interviews with popular artists—such as Rone from Australia, Astro from France, Marthalicia Matarrita from New York, and Elle from Los Angeles—as well as activists with experience of the civil rights movement, the anti-apartheid struggle in South Africa, and human rights work on behalf of Iranians of all backgrounds. Iranian Bahá’ís with personal experience of being denied their right to higher education also share their stories.

Education Is Not a Crime raises awareness of the discrimination against the Bahá’ís, who believe in ideals such as the equality of men and women, peaceful nonviolence, and universal education. The campaign began in 2014, and since then street artists and human rights activists have teamed up to use art, social media, and community outreach to build a new audience for their message of education equality in Iran. 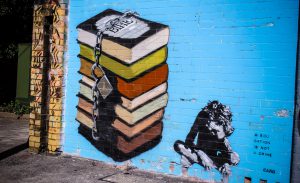 The Bahá’ís, Iran’s largest religious minority, are denied access to higher education. There are 74 Bahá’ís currently imprisoned, and more than 200 were executed in the early 1980s after the 1979 Islamic Revolution. Thousands of Bahá’ís are currently studying through an underground education system known as the Bahá’í Institute for Higher Education (BIHE). Not a Crime is working to stop the human rights abuse of young people barred from studying because of their beliefs and is encouraging universities worldwide to admit Iranian Bahá’í students. The education campaign started in 2015 with an Education Is Not a Crime Day (the last Friday of February 2015) and screenings of a film Bahari made called To Light a Candle—and now it has grown into a movement. Mark Ruffalo of The Avengers, Rainn Wilson of The Office, Desmond Tutu, the Nobel Peace Prize laureate and rights activist, and Shirin Ebadi, also a Nobel Peace Prize laureate, have spoken against the persecution of the Bahá’ís. Nearly 100 universities—including Stanford and Yale—currently accept the BIHE certificate. 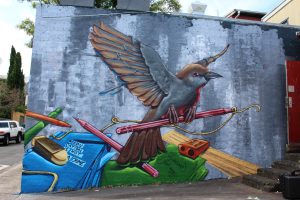 Forty-one murals have been painted in U.S. and international cities as part of the project—Atlanta, Cape Town, Delhi, London, Nashville, Sao Paulo, Sydney, and two dozen in New York City. Nineteen of the New York murals were painted in the iconic Harlem neighborhood because of its long association with cultural innovation during the Harlem Renaissance and the 1960s civil rights movement.