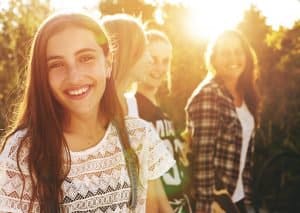 One of the most common arrangements for English language learners (ELLs) at schools in the U.S. is for them to take subject classes (e.g., math or science) in English, together with non-ELLs at grade level. ELLs are then pulled out of class for separate English language development (ELD) instruction. Existing software-based solutions are specific to ELD or ELA instruction and focus on targeting either foundational or linguistic requirements via computer-adaptive curricula.

Foundational and linguistic skills are essential for students. However, these challenges remain:
1/ Existing ELL tools are taught solely in a separate ELL class and receive support in a small portion of the day.
2/ Existing tools are curriculum dependent, leaving the majority of ELLs in core subject classes unsupported, to sink or swim.
3/ Existing tools do not incorporate the most recent best practices highlighted by the U.S. Department of Education, such as leveraging native-language proficiency (L1) to acquire English proficiency (L2).

These challenges directly contribute to the achievement gap affecting ELLs. In 2016, Moondrop received funding from the National Science Foundation (NSF) as an awardee of the Small Business Innovation Research (SBIR) grant to address these challenges. With this grant, it partnered with the Los Angeles County Office of Education (LACOE) and Val Verde Unified School District to research and develop the first digital language transfer tool.

The goals of the research project were:
Development: To develop a tool that would provide meaningful input in any content area by using both English and Spanish sentence frames calibrated for different cognitive and proficiency levels and by providing audio and text versions of each frame.
Research: To test the product in three schools with a mix of newcomer students, English learners level one (EL1s) and English learners level two (EL2s), representative of the most common setup, to determine whether the tool improves the speed of L2 language development. The test subjects included 65 students from kindergarten to fourth grade in the Val Verde school district.

Development
Moondrop researched and developed a web-based solution for ELL instruction for nonnative speakers using LACOE’s scaffolding tool and Drawp’s digital platform as building blocks. The solution is not tied to any set curriculum, allowing its universal use in any classroom, not just ELD. It is innovative because it is the first tool to leverage native-language literacy and the first to be curriculum independent. It is integrated into the Drawp for School platform.

Drawp for School Platform
Drawp for School is a software product that allows teachers to distribute work to students. Students can access the work from their own cloud-based accounts, add text, voice recordings, or images, and then swipe to share the work back to teachers or collaborate with other classmates. Its powerful digital work tool serves to support and enhance activities for any subject and works with any device.

The New Language Transfer Tool
Phase I innovation included digitizing the LACOE scaffolding tool and making it available via the existing platform. The resulting language transfer tool leverages not only the English-language scaffolding sentence frames that the paper tool currently includes but also native-language scaffolding that no tool currently possesses. Frames are calibrated for different cognitive and English proficiency levels (emerging, bridging, and expanding). The tool also has audio scaffolds for both English and Spanish sentence frames.

With the tool, a teacher can ask questions at the same level of cognitive difficulty for all students in a class. For example, to explain the water cycle in a science class, a teacher might target students’ memory with a cognitive level-one sentence frame.

The tool is powerful because it includes all the different types of scaffolding students might need in class:
1/ If students understand Spanish better than English, they can leverage the L1 scaffolds.
2/ If they have lower proficiency levels in either language, they can see versions of the sentence frame calibrated by proficiency level.
3/ If students have better listening than reading skills, they can use the audio version of the sentence frame.
4/ If they have better oral than written skills, they can speak their answers via voice recording stickers instead of writing them.
The tool meets students where they are, empowering them to 1) understand content and 2) express themselves. The tool provides the most robust set of scaffolds available today.
Research on Efficacy
The total timeline for this project was six months. We conducted entry/exit interviews for both teachers and students. Monthly observations were conducted by ELL specialists and, most importantly, by Magdalena Ruz Gonzalez, the creator of the LACOE tool and a professional dedicated to bilingual education and ELL students for more than 30 years. Qualitative data was gathered from the Woodcock-Muñoz Language Survey—revised (WMLS-R) in English for L2 and Spanish for L1. The WMLS-R measures both absolute ability changes (W score differences) and relative ability changes (RPI differences) and offers detailed subtests and clusters for different language areas.

Qualitative Results
Teachers used Chromebooks to access the language transfer tool. The curriculum used by the teachers was in English and was mostly drawn from Wonders, iStation, or reading/spelling passages that they sourced themselves. In other words, teachers used the language transfer tool with the curriculum that they were already successfully using in class. Most of the teachers encouraged individual work, though some had students working in groups.

The results show that the language transfer tool was successful both among teachers and among students. Among students, the tool was popular because:
1/ It was fun.
2/ It gave them confidence to speak up because they could use the voice recording stickers to express themselves.
3/ It was empowering for them to feel that they were understood.

Sample responses from students:
“It helps me talk” (second grade).
“After the sentence, you speak and the word is in your head” (second grade).
“It’s fun and cool” (third grade).
“It’s awesome” (second grade).
Teachers expressed positive comments about improvement in academic English, fluency, increase in confidence, and increase in parental engagement. After initial training, teachers were able to easily incorporate this novel tool into their existing curriculum, without the need to significantly alter or disrupt the children’s routine activities.
Teachers’ impressions of the language transfer tool after using the tool for six months:

Quantitative Results
Overall, there were increases in the W score and the RPI, which means that students improved not only in absolute terms but also relative to their peers nationwide. There were greater improvements in the easier tests (picture recognition and letter-word identification) than in the harder ones (story recall and passage comprehension). This is not surprising, as students are expected to improve basic skills before assimilating more complicated ones. Notably, students increased six points in absolute reading ability (as measured by the W difference), meaning that tasks that could be performed with a 50% chance of success can now be performed with a 65% chance of success. They also moved three percentile points above their peers (as measured by the RPI difference).

We conducted linear regression analysis for each of the seven Woodcock-Muñoz improvement areas, with the W score increase as the dependent variable and demographic variables, teacher data, tool engagement, and student preferences as independent variables.

We found that teachers were the most relevant factor, explaining from 21.5% to 32.9% of variance for the different tests. The second most relevant factor was engagement while using the language transfer tool, as measured by the number of taps. Tool engagement was most significant for three of the tests: reading, language, and passages. Importantly, we found that survey questions (e.g., Do you like the tool? Did you feel you learned with the tool?) were noisy/irrelevant, as were variables such as gender, grade, and school.
Since the language transfer tool is curriculum independent, different teachers focused on different types of assignments. The fact that tool engagement was relevant for the reading cluster, the language comprehension cluster, and passage comprehension might be explained by the fact that those are the types of assignments most teachers (notably, the most effective teachers) focused on. The tool effectively increased the impact that teachers had in the areas of language they chose to focus on.

Conclusion of Phase I Findings
The most important findings of the study were:
1/ Although students used our platform for only four months (twice a week), the language transfer tool improved students’ absolute proficiency in language comprehension, reading, and oral expression as measured by the W scale. More importantly, students improved their proficiency at a faster rate than their peers nationwide (as measured by the RPI).
2/ We found that engagement with the tool (as measured by the number of taps) was correlated with improvement in reading, language, and passages (as defined by the WMLS-R tests) in particular.
3/ The study underscored the importance of teachers in the classroom; as expected, the tool can only enhance good teaching, not replace it.

Ana Albir is the CEO and founder of Moondrop, developers of the Drawp for School collaborative education software platform.