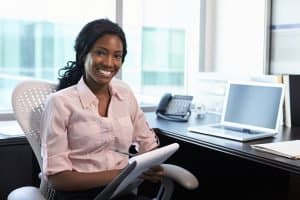 In 1992, Liliya Stefoglo came to America from Moldova and found work as a paraprofessional in Federal Way Public Schools in Washington State. As a speaker of English, Russian, and Ukrainian, three of the district’s top five languages, Stefoglo was a critical resource in a classroom with many young dual-language learners (DLLs), the linguistic conduit between her students, the teacher, and students’ families.

While Stefoglo was happy to use her language skills in her new job, like many paraprofessionals, she faced low and stagnant wages and had the desire to advance in her career. Over time, she developed strong instructional competencies by facilitating small-group instruction and supporting student learning. But despite her potential to lead rather than assist instruction, Stefoglo remained a paraprofessional for ten years, lacking guidance from her district, supervisor, and colleagues.

When a new principal arrived and took notice of Stefoglo’s instructional expertise, she learned how to advance her career. He encouraged her to become a teacher, a process she knew nothing about. He asked about her credentials. To his surprise, Stefoglo had both a bachelor’s and a master’s degree from her home country, the latter in linguistics and education. She had studied to become a teacher in Moldova.

But the process for applying to teach in the U.S. was laborious. Stefoglo first needed to get her credentials recognized by Washington State and then take multiple exams to become certified and licensed to teach. Her assistant principal connected her to a member of the state’s teacher certification office, who explained the financial implications of each step in the application process, from credential evaluation to test registration and administrative processing fees. Some of Stefoglo’s peers scoffed at her pursuit of a teaching credential. One said, “There are other opportunities for people like you. You can’t be a teacher in America with such a heavy accent.”

She proved them wrong. One year and $5,000 later, after cutting through much red tape, Stefoglo became a lead teacher—and a great one, prized by her students, school, and community. She went on to receive National Board Certification, a distinction that involves a rigorous, competency-based application process. Later, she became a director of English as a second language (ESL) services for another Washington school district.
While Stefoglo’s circumstance is common, her advancement story is unusual.

Paraprofessionals are twice as likely to speak a language other than English at home than their teacher counterparts, and many bring instructional knowledge and clear, accessible pathways for gaining teacher certification in the U.S. but often face many hurdles along the way. Multilingual paraprofessionals represent a largely untapped pool of potential teacher talent—largely because policies have made it difficult for them to advance to lead teacher.
Some research already exists on multilingual paraprofessionals and the barriers that they encounter when applying to teach.

Last June, we released a brief, “Multilingual Paraprofessionals: An Untapped Resource for Supporting American Pluralism,” that identifies hurdles—bureaucratic, financial, and linguistic—that paraprofessionals face on the pathway to teaching, summarizes existing research on each, and begins to explore solutions.

This report, based on conversations from focus groups with dozens of paraprofessionals across five cities, illustrates these hurdles from the paraprofessionals’ perspective. Our work here amplifies paraprofessionals’ voices and their concerns in order to inform policy solutions grounded in community and stakeholder input.

A recent study conducted by Charles Clotfelter, Steven Hemelt, and Helen Ladd in North Carolina found that paraprofessionals had a positive effect on students’ test scores in reading and minority students’ test scores in math. And their impact was larger for minority students than for white students in both subjects and went beyond academic outcomes; they also helped to reduce rates of absenteeism.

These potential teachers are valuable assets in our nation’s increasingly diverse school system. Dual-language learners are a growing population and represent 10% of total public school enrollment in the U.S.

Of course, multilingual instructional approaches are only viable for schools that have multilingual teachers on staff (see sidebar: “Why Multilingual Paraprofessionals Matter for DLLs” on page 8). Ongoing, steady increases in the number of DLLs enrolled in American schools mean that multilingual teachers are currently in high demand.12 Indeed, 32 states and the District of Columbia report shortages of bilingual, dual-immersion, and ESL teachers.

Moreover, most states and urban districts report a significant teacher diversity gap.14 In fact, students of color make up a majority of the nation’s student population, while the teaching population is 82% white.

Since the paraprofessional workforce more closely reflects the diversity of the U.S. population on a variety of measures (see Figure 1), supporting its career advancement could help states and districts narrow this gap and increase the racial, ethnic, and linguistic diversity of their teaching force.

As the diversity of America’s student population grows, it is critical that policymakers pave pathways for promising paraprofessionals to enter teaching and mitigate key barriers along their way. In turn, this could increase the diversity of the mostly white, monolingual teacher workforce and help ensure that America’s future teachers can best meet the needs of DLLs and other diverse learners.

This article is excerpted under a Creative Commons license from Teacher Talent Untapped, a report by New America. The full report is available at www.newamerica.org/education-policy/policy-papers/teacher-talent-untapped/.

This article is excerpted under a Creative Commons license from Teacher Talent Untapped, a report by New America. The full report is available at www.newamerica.org/education-policy/policy-papers/teacher-talent-untapped/.