The 17th Annual Week of the Italian Language in the World from October 16-21, 2017 is a cultural event which promotes Italian not only as a marketing tool of the great cultural heritage of Italy but also as an extraordinary medium of communication in the world of economy and business, science and research. Every year the diplomatic and cultural network of the Ministry of Foreign Affairs and International Cooperation of Italy chooses a theme for this initiative and organizes a series of events in the third week of October. This year, under the High Patronage of the President of the Republic of Italy, the chosen topic is “L’italiano al cinema, l’italiano nel cinema” (Italian at the cinema, Italian in the cinema). It is a tribute to the role that cinema has played, through the recreation of events linked to Italian history, both in the evolution of the language and in the development of society. 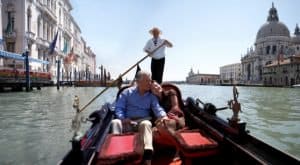 With over 50 events throughout the week residents in Boston, Chicago, Detroit, Philadelphia, Houston, Los Angeles, Miami, New York, San Francisco and Washington D. C. will have many opportunities to immerse themselves in exhibits, conferences, shows and linguistic events.

The first of several events organized by the Embassy of Italy and the Italian Cultural Institute in Washington D.C. will be a conference on Screening the Classics, on Monday October 16 at 6pm at the Embassy of Italy. Edoardo Ripari, professor of Italian at the University of Bologna, will explore the relationship between Italian literature and world cinema showing how great classics, from Dante’s “Divine Comedy” to Boccaccio’s “The Decameron”, from Collodi’s “Pinocchio” to Verga’s “I Malavoglia”, have been reinterpreted by filmmakers such as Woody Allen, Luchino Visconti, Federico Fellini, Steven Spielberg and others.

In addition to being the language of tradition and memories for many Italian Americans, Italian today is an essential promotional vehicle for Italy, for its lifestyle and for the image of a country which not only represents beauty but also innovation and modernity. Every year students of all ages and backgrounds choose to study Italian. In the 2015/2016 school year there were over 2 million students of Italian outside of Italy, Switzerland and San Marino.

To view all the events scheduled in the Italian diplomatic network in the USA: