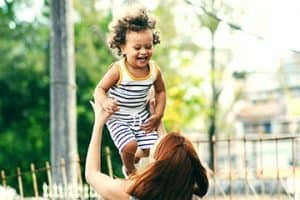 A new study shows that mothers change the timbre of their voices when speaking to babies, no matter what language they speak. The study came out of the Princeton Neuroscience Institute and was published in Current Biology.

Researchers looked into the timbre of mothers voices—that is, the characteristic tone quality of how their voices sound, not exactly what the subjects were saying.

Timbre is tied not to pitch or loudness, but instead is defined by frequencies produced by a person’s voice (or instrument). It helps us to discriminate, recognize, and enjoy a rich variety of sounds, from friends voices to musical instruments. Vocal timbre varies widely across people due to the physical makeup, and has many dimensions due to the individuality.

Many studies have already concluded that mothers in many languages raise their pitch (giving that distinct baby-voice), slow down their speech, talk in a “cooing” pattern, and shorten and simplify words. Researchers wanted to quantify the change in timbre and analyze how they changed depending on the language. This kind of talk is called infant-directed speech (IDS).

They concluded for the first time that IDS is defined by changes in timbre that help differentiate it from adult-directed speech across multiple languages. Timbre plays an important role in code switching for these adults, and added another dimension to the previously known characteristics of IDS.

The 24 mothers that participated in the study were measured speaking to their infants and then to adult interviewers. They found that English speakers performed similarly to other languages when it came to timbre shifts.