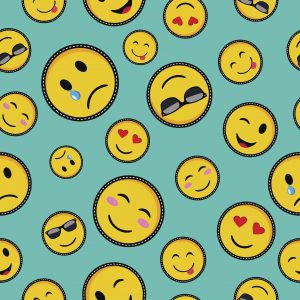 Naysayers like to cite the popularity of emoji and emoticons as yet more evidence of the erosion of language and literacy and, perhaps, civilization itself. But studying how people use them can reveal much about our ability to socialize and exchange information.

For example, a recent study by a team of researchers that included UAlbany Professor of Psychology Laurie Feldman includes important findings about how bilinguals use emoticons to optimize communication.

“Patterns of emoticon use constitute a novel yet systematic, nonverbal aspect of communication,” said Laurie Feldman, one of four researchers on the study. “Adult scientists who do not speak the same first language and who worked together for four years altered their use of emoticons and vocabulary depending on the communication style of others in the conversation.”

Participating in the study, which was published in July in the journal Bilingualism: Language and Cognition, were 30 astrophysicists in the United States and France. The group collaborated remotely to observe and control a shared telescope.

In an increasingly digitalized world, where cross-cultural collaborations like the one analyzed in the study are bound to become more common, learning ways of bridging communication gaps with new technology becomes ever more valuable.

“Successful communication and decision-making is at the core of productive remote collaboration,” the study states. “A key to success is apprehending the experiences and emotional cues of others.”

Feldman and her collaborators identified and studied patterns in communication in the AOL Instant Messenger chat logs generated by the scientists. They found that emoticon use among the bilinguals (all French-English speakers) differed in significant ways from their English-speaking counterparts.

The French speakers were fluent in English, so they could have easily expressed themselves in words, yet there were differences in the ways they used emoticons relative to the English-only speakers. Bilinguals used both a wider vocabulary of emoticons and a greater number of them per message. More significantly, they were better able to adjust their vocabulary according to their monolingual partners, and this was especially conspicuous for emoticons.

“Emoticons are sensitive to the same cognitive and social pressures as words when we communicate,” Feldman said. “It’s not a conscious decision, you define a common vocabulary to use and reuse with someone without being aware of it, and it turns out that emoticons are part of that shared vocabulary.”

When bilinguals “code-switch,” or alternate between two or more languages, they are changing how they communicate with respect to the words they choose, while adhering to the idea they intend to share.

One reason why translating word-for-word from one language to another is problematic is because some combinations of words take on a meaning that cannot be predicted from the individual words that comprise the message, according to the study.

“In the case of idioms – ‘It’s raining cats and dogs,’ for example — word-to-word translation can even be humorous if words are selected without regard to the overall meaning,” Feldman said.

However, the research shows that combining words and emoticons is more like code-blending because emoticons can alter the interpretation of the words that accompany them.

Because emoticons aren’t regarded as constituting a true linguistic “code” in and of themselves, “any evidence for trade-offs between words and emoticons is particularly interesting,” Feldman said.

Feldman, a cognitive psychologist interested in language, joined the UAlbany faculty more than 26 years ago. Her research examines speaking and reading in native speakers and non-native speakers of a language with special attention to the ways we combine meaningful elements (morphemes) to form longer words.