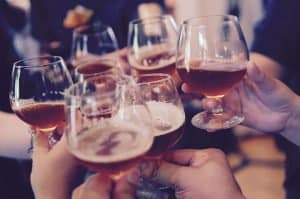 It’s a popular belief that alcohol helps improve speaking skills for a foreign language, but the belief can be easily passed off as a perceived improvement instead of an actual improvement. A new study has confirmed, however, that acute alcohol consumption may have beneficial effects on the pronunciation of a foreign language.

Many studies have been conducted that prove the various ways that alcohol impairs several aspects of cognitive functions, such as working memory. These cognitive functions are necessary for word pronunciation, so it would seem counterintuitive that acute alcohol consumption would actually help pronunciation instead of hurting it. The long-held explanation for the popular belief that acute alcohol improves foreign-language performance is that alcohol may alter bilingual speakers’ perception of their own ability to speak the second language. A general increase in confidence is often seen when consuming alcohol, and higher self-esteem is linked to overconfidence in performance.

The study observed 50 undergraduate psychology students at Maastricht University in the Netherlands who were German natives that had learned Dutch as a second language. All of the students reported that they drank alcohol occasionally. The students were divided into two groups—one group was given hot water to drink while the other was given vodka and bitter lemon drinks. The participants were unaware of which group they were a part of.

After the participants drank their beverages, they took a breathalyzer test to see if they were at the target blood alcohol levels (the non-alcohol participants did this as well. Then they were told to speak for two minutes either for or against animal testing in Dutch. The participants were then told to rate their performance 1-5. The speeches were also recorded, and two native Dutch speakers who were unaware of which groups participants were a part of rated the performance of Dutch language skills 0-100 and also graded pronunciation, grammar, vocabulary, and argumentation 1-10.

On average, before the experiment all participants rated their Dutch language skills as average to good, and there were no significant differences between the two groups on self-reported Dutch language skills prior to the experiment. Contrary to the hypothesis that those who consumed alcohol would have higher self-reported skills, both groups had around the same self-reported scores. The surprise came, though, when the Dutch judges rated the language performance of participants who consumed alcohol to be significantly better than that of participants who consumed water. The higher scores were given for pronunciation, while grammar, vocabulary, and argumentation did not significantly differ between groups.