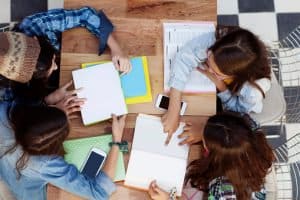 Exposure to diversity in the classroom tends to be associated with better collaboration skills., according to the first OECD PISA assessment of collaborative problem solving, and girls are much better than boys at working together to solve problems.

The Program for International Student Assessment (PISA) collaborative problem solving assessment was given in 2015 and measured students’ ability to solve a problem by sharing the understanding and effort required to come to a solution, and pooling their knowledge, skills, and effort to reach that solution.

PISA is coordinated by the Organization for Economic Cooperation and Development (OECD) and conducted in the U.S. by the National Center for Education Statistics (NCES). The U.S. was one of 51 education systems participating in the PISA collaborative problem-solving assessment, along with two U.S. states—Massachusetts and North Carolina. About 125,000 15-year-olds took part in the test, which analyses for the first time how well students work together as a group, their attitudes towards collaboration, and the influence of factors such as gender, after-school activities, and social background.

U.S. students outperformed their peers around the world, on average, with 14% of students scoring at the highest level of proficiency, which may be a positive benefit of immigrant students. The report recommends that “students be encouraged to mingle with others from different backgrounds” and that: “One of the demographic factors related to the collaborative aspect of performance in this assessment is the concentration of immigrant students in a student’s school. Non-immigrant students tend to perform better in the collaboration-specific aspects of the assessment when they attend schools with a larger proportion of immigrant students. This result cannot be generalized to socio-economic diversity within schools, however. Education systems should investigate whether, in their own context, diversity and students’ contact with those who are different from them and who may hold different points of view can aid in developing collaboration skills.”

Another interesting finding is that “there is no clear relationship between socio-economic status and students’ ability to work productively with others…Likewise, there are no large differences between the collaborative skills of immigrant and non-immigrant students.”

“In a world that places a growing premium on social skills, education systems need to do much better at fostering those skills systematically across the school curriculum,” said OECD Secretary-General Angel Gurría. “Parents and society at large must play their part too. It takes collaboration across a community to develop better skills for better lives.”

Students who have stronger reading or maths skills tend to be better at collaborative problem-solving because managing and interpreting information, and the ability to reason, are required to solve problems. The same is true across countries: top-performing countries in PISA, like Japan, Korea and Singapore in Asia, Estonia and Finland in Europe, and Canada in North America, also come out top in the collaborative problem-solving test.

However, students in the U.S., Australia, Japan, Korea, and New Zealand perform better in collaborative problem solving than would be expected based on their scores in science, reading and mathematics. But students in the four Chinese provinces that took part in PISA (Beijing, Shanghai, Jiangsu and Guangdong) do less well compared to their results in mathematics and science.

Girls do better than boys in every country and economy that took the test, by the equivalent of half a year’s schooling on average (29 points). On average, girls are 1.6 times more likely than boys to be top performers in collaborative problem solving, while boys are 1.6 times more likely than girls to be low achievers. This is in sharp contrast to the findings of the 2012 individual problem-solving test which found that boys performed better than girls.