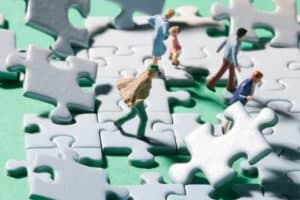 Today, Oxford Dictionaries announced its Word of the Year 2017 is YOUTHQUAKE (noun /ˈjuːθkweɪk/), defined as a significant cultural, political, or social change arising from the actions or influence of young people

In a statement, Oxford Dictionaries explained its selection: “2017 has been, without doubt, a year of seismic cultural, political, and social shifts played out across the globe. But it was the so-called political awakening of the oft-maligned millennial generation which generated the word of 2017.”

Announced as the chosen word in a blog post and video, youthquake saw a 400% increase  in usage between 2016 and 2017, following the British general election where much debate focused on the mobilization of young voters in supporting opposition parties. Aftershocks have been felt across the world, including in New Zealand and in France, and whether or not they experienced a youthquake, the word certainly highlights the increased awareness of young people’s capacity to influence, and even drive, political change.

However, despite so aptly capturing the mood of 2017, youthquake is not a new word but rather one that is newly prominent this year and being used in different contexts. Based on the formation of the word ‘earthquake’ and originally coined in the 1960s by then-Vogue editor, Diana Vreeland, to describe how British youth culture was changing the world’s fashion and music, youthquake was resurrected this year to be used in a new context.

“Youthquake may not seem like the most obvious choice for Word of the Year, and it’s true that it’s yet to land firmly on American soil, but strong evidence in the UK calls it out as a word on the move,” says Casper Grathwohl, president of Oxford Dictionaries.  In a dedicated blog post, Grathwohl notes, “We chose youthquake based on its evidence and linguistic interest. But most importantly for me, at a time when our language is reflecting our deepening unrest and exhausted nerves, it is a rare political word that sounds a hopeful note. Sometimes you pick a word as the Word of the Year because you recognize that it has arrived, but other times you pick one that is knocking at the door and you want to help usher it in.. This past year calls for a word we can all rally behind.”

Susie Dent, consultant to Oxford Dictionaries, said: “There’s not a lot of sunshine in the standout words this year. Words like Antifa, and kompromat speak to fractured times of mistrust and frustration. In youthquake we find some hope in the power to change things, and had a little bit of linguistic fun along the way. It feels like the right note on which to end a difficult and divisive year.”

In alphabetical order, the shortlisted words (along with Oxford’s definitions and context) for the Oxford Dictionaries Word of the Year 2017 are:

Antifa is a shortening of ‘anti-fascist’ and has morphed over time to become a proper noun used to refer to an extreme anti-fascist movement. Originally a loan word from German with usage dating back to WWII, Antifa is only becoming widely used in English now and its pronunciation and grammar are still very much in flux. Our current definition uses a capital letter and gives two pronunciation forms: primary stress can either go on the first syllable (as it would for the word ‘antifascist’) or on the second syllable as with Spanish words like ‘tortilla’. Use of the word skyrocketed following high-profile protest movements across the world this year and it looks set to become a permanent part of our current political lexicon.

broflake noun (informal, derogatory) – a man who is readily upset or offended by progressive attitudes that conflict with his more conventional or conservative views

Lexically, broflake combines two prominent trends in 21st century English lexical innovation: the appropriation of terminology from one’s political opponents and the popularity of compounds using ‘man-’ and ‘bro-’ to refer to male behaviour and characteristics. Spawned by the growing derogatory use of ‘snowflake’ to refer to an overly sensitive or easily offended person, progressive activists reversed this by combining the ‘-flake’ from ‘snowflake’ with ‘bro-’to target behaviour regarded as emblematic of male privilege and anti-feminism.

Widely used to deride conservative figures when they revealed their own sensitivities around issues such as female-only spaces and challenge the idea of the male experience as a default, broflake was being used in social media by late 2016 but appeared for the first time in mainstream sources this year and is now spreading to social media in non-English languages. It is a word that not only emerged in 2017 but truly captures some of the most hotly debated issues underpinning it.

gorpcore, noun – a style of dress incorporating utilitarian clothing of a type worn for outdoor activities

A 2017 fashion trend, the word gorpcore was created by combining ‘gorp’, an American term for trail mix and frequently thought to be an acronym for ‘good old raisins and peanuts’ (although this is unsubstantiated), with the suffix ‘-core’ taken from ‘normcore’. It refers to a trend for functional outdoor clothing worn for fashion, rather than for practical reasons.

Popular with fashion commentators in 2017, gorpcore was celebrated for capturing an idealism in the outdoors—without its wearers necessarily having to directly interact with anything more wild than the leafy suburbs—as well as bringing comfort to the upper reaches of designer fashion.

kompromat noun – compromising information collected for use in blackmailing, discrediting, or manipulating someone, typically for political purposes

A loanword from Russian, kompromat is a blended abbreviation of the phrase komprometirujuščij material (compromising material), which is ultimately derived from those English words, making this a sort of ‘boomerang loanword’, in which an English word is adopted into a foreign language, changed and remixed, and then borrowed back.

Kompromat hit the headlines at several points throughout 2017 following high profile accusations against politicians across the world and shadowy suggestions of secret dossiers. The prevalence of kompromat this year underlines the global nature of our political interchange as well as our free flow of language between different countries and cultures.

Imagine a milkshake-drinking duck. Beloved of the online community for its innocent and adorable milkshake-drinking antics. Cute, right? But then you find out that this duck is actually a rampaging racist… Voilà, the quintessential ‘Milkshake Duck’!

Originating in the Twittersphere in 2016, ‘Milkshake Duck’ has become a way to refer to any person or thing that gains fleeting popularity for something seemingly pleasing, only for a deeper exploration to reveal unfortunate truths about their past or opinions, typically a connection to or history of some form of bigotry. It saw a spike in usage in June 2017 following some unfortunate revelations about a popular game developer.

Remember when La La Land was named Best Picture instead of Moonlight? And remember how Specsavers jumped straight on that meme band wagon? The internet loved it – a perfect example of how newsjacking came to the fore this year.

The term itself originates from the 1970s where it was used in reference to the theft of newspapers in order to sell them to scrap dealers. The current usage has been around throughout the early 21st century and the technique utilized by savvy marketers for years. The strength of feelings around the themes and stories that were the focus of this year’s newsjacking campaigns and the support or backlash they inspired ensured that “newsjacking’”took a slot on this year’s Word of the Year shortlist.

unicorn adjective [attributive] – denoting something, especially an item of food or drink, that is dyed in rainbow colors, decorated with glitter, etc.

The “rainbowfication” of the world’s foodstuffs has been on our radar (and Instagram feeds) since 2016 but peaked this year with the launch of a Unicorn Frappuccino by Starbucks in April. Bringing the trend fully into the mainstream, 2017 will go down in history as the year that we all had our fill of unicorn lattes, unicorn bagels, and even, unicorn grilled cheese…

Coined in a 2011 journal article by the U.S. academic and educator Robin DiAngelo, white fragility reached the mainstream this year as questions of racial equality ran close to the surface of debate across the world. With evidence for the term’s use particularly strong in university newspapers, white fragility encapsulates a key undercurrent of political and cultural debate in 2017 and could not be overlooked for this year’s Word of the Year shortlist.