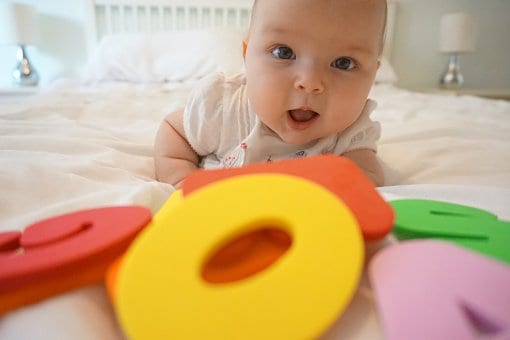 It’s long been known that babies modify their sounds to become more speech-like in response to feedback from their caregivers, and that they learn things have names by caregivers naming objects. But a news study, published in Developmental Science examines how specific types of babbling elicit particular parental behavior.

To answer this, the research team—Rachel Albert, assistant professor of psychology at Lebanon Valley College; Jennifer Schwade, senior lecturer in psychology at Cornell University; and Michael Goldstein, associate professor of psychology at Cornell University—recorded and recombined the vocalizations of 40 nine-month-olds and their mothers, using a “playback paradigm,” widely used in animal studies, to assess how specific forms of sounds and actions by infants influenced parental behavior.

The research sessions were conducted in a playroom with toys. Infants were outfitted with denim overalls in which a wireless microphone was concealed. Sessions took place in Goldstein’s B.A.B.Y. Lab, which is outfitted with video cameras to record responses during live play.

“We expected that mothers would respond more often when babbling was more mature, and they did,” said Goldstein. “The increased rate of response meant more language-learning opportunities for the baby. The mothers’ speech was also more likely to contain simplified, learnable information about linguistic structure and the objects around the baby. Thus, by varying the form and context of their vocalizations, infants influence maternal behavior and create social interactions that facilitate learning.”

The researchers also found that mothers responded more often and more informatively to vocalizations directed at objects than those that were undirected.

“We suspected this would be the case,” Albert said, “because the object the baby is looking at creates an opportunity for the mother to label it, so she’s more likely to respond with specific information than when a baby is babbling at nothing.”

In this way, write the researchers, “the infant’s own vocalizations serve to structure social interactions in ways that facilitate learning. … These results contribute to a growing understanding of the role of social feedback in infant vocal learning, which stands in contrast to the historical view of prelinguistic vocalizations in which babbling was assumed to be motor practice, with no function in the development of communication and language.”

The study sheds light on correlations between early babbling and later language and studies finding that babies with more advanced syllables in their babbling have more advanced speech and vocabulary when they’re older.

“We think there may be a kind of feedback loop, where for example parents’ labeling objects and rewarding more advanced vocalizations by responding more frequently promotes word learning,” said Schwade.

These results may help in understanding delayed vocal development in at-risk populations and those with hearing delays, Down syndrome and autism spectrum disorder. Fewer vocal interactions between children and caregivers, write the researchers, could “cascade into long-term differences in response expectancies, impacting language development over time as opportunities for learning from contingent parental responses are reduced.