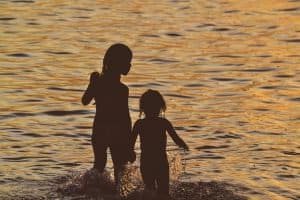 Altogether, this would appear to be a golden age of language-acquisition research, and yet we lack a framework for assembling this rich dataset into a comprehensive picture of how children acquire language. For the most part, we publish the results of language-acquisition research on one language at a time. We train our students to investigate how children acquire a single language. Our analytic techniques work best when we can isolate one or two factors such as vocabulary size or sentence length in a single language.

Comparing the course of language development in different languages forces investigators to ignore most of the differences that distinguish the languages. While English contrasts the /p/ in pit and the /b/ in bit, the Mayan language K’iche’ contrasts the /p/ in pa ‘on’ and the voiced, implosive sound /ɓ/ in ɓa ‘gopher’. (Implosive sounds are produced by breathing in air rather than by breathing out.) The differences between English and K’iche’ involve not just sounds but every aspect of the grammar, up to and including when to say “I’m sorry.” English has a double object construction (“give me the box”) that K’iche’ lacks. K’iche’ has two “antipassive” constructions that English lacks. Subjects and direct objects are obligatory in English and optional in K’iche’. A single verb complex in K’iche’, e.g., Katenwila’, requires a whole sentence for its translation in English: “I’m going to see you.”

The acquisition of negation illustrates how the comparative method controls extraneous factors in language-acquisition research. English has two forms of syntactic negation. The form not is used in contexts of predicate negation, e.g., “It cannot wait.” The form no is used in discourse contexts as a response to questions and commands, e.g., Adult: “Do you want to go out?” Child: “No.” No is also used for term negation to negate noun phrases, e.g., “We have no bananas today.”

Children acquiring English have to learn the proper contexts for using these different forms of negation. Amazingly, children often produce no in contexts of predicate negation, e.g., Kathryn’s “no zip” (Bloom, 1970, 150). This overextension is so widespread in the acquisition of English that we might be tempted to predict that all children will extend forms for discourse negation to contexts of predicate negation. There are sporadic examples of this overextension in German, but not in Danish and Swedish (Plunkett and Strömqvist, 1992). The difference in the development of negation between Swedish and English suggests that the link between predicate negation and auxiliary verbs in English accounts for the difference between negative acquisition in English and other Germanic languages.

Research on the acquisition of English has become the standard for all language-acquisition research and creates a lens that distorts research on other languages. The comparative method encourages the investigation of children learning other languages by rejecting the need to tie their results to English. The accelerating loss of endangered languages requires the use of a research framework like the comparative method that promotes the investigation of under-studied languages.

The act of documenting how children acquire an endangered language can lead parents to reassess the value of their cultural heritage and form the basis for language-revitalization efforts. Documenting the acquisition of under-studied languages is the only way to meet Chomsky’s goal of constructing a theory of language acquisition.

Mayan languages spoken in Mexico and Guatemala. His book, The Comparative Method of Language Acquisition Research (University of Chicago Press, 2017), is available now.