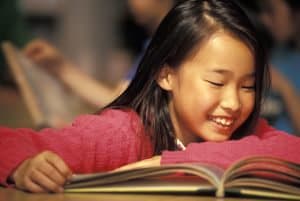 The study focused on prediction errors between 24 English monolinguals and 28 Chinese-English bilinguals. The participants read sentences in English while their EEG was recorded. The sentences were set up so that the participants had to predict a missing word. For example, in the sentence “She has a nice voice and always wanted to be (a singer/an artist), the word singer would be the accurate prediction given the context clues.

The researchers found that monolinguals have difficulty making the predictions when they came across unexpected words. On the other hand, researchers found that bilingual participants were able to predict more accurately when they were able to regulate their native language. The study suggests that bilinguals solve basic language problems in more complicated ways: by both determining what new words mean, and by regulating their native language when reading a second language.

Researcher Megan Zirnstein told Science Daily, ““The ability to regulate the native language when immersed in a second language environment can support the prediction process when reading in the non-native language. We argue in our paper that the mechanisms engaged during prediction in native and non-native languages are fundamentally the same, and that what differs for bilinguals are the additional demands imposed by their language experience and language use. Using production fluency measures, we were able to capture how capable the bilinguals were at bringing the activation of their dominant Mandarin up and down in a way that benefitted them when using English. Their ability to do this is crucial for freeing up resources to be able to predict when reading in English, their second language.”

“We went in thinking second-language readers may not be able to predict the way monolinguals do,” she added. “But when we take into account that some bilinguals are very skilled at negotiating the environmental and linguistic pressures that are exerted on them, we can see that their ability and brain activity in their second language mimics that of monolinguals. In other words, some bilinguals can comprehend in their second language just as well as monolinguals do.”