Although U.S. Latinos believe it’s important for future generations of Hispanics to speak Spanish and the vast majority speak the language to their children, less Latino parents ensure their c 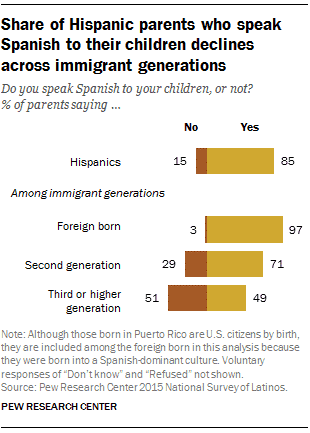 hildren speak Spanish as they become second- and third-generation, according to a new Pew Research Center analysis.

About 70% of all Hispanic parents say they often encourage their children to speak Spanish, but again, successive generations are less likely to continue doing this. 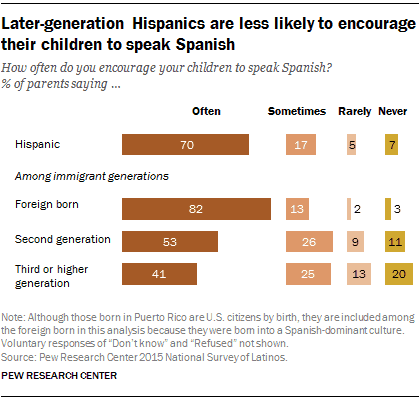 Nearly all Hispanic adults also express a desire for the language to live on: 88% say it’s important to them that future generations of Hispanics living in the U.S. be able to speak Spanish, and this view holds across generations.

Overall, about 40 million people in the U.S. speak Spanish at home, making it the country’s second-most spoken language. At the same time, growth in the number of Spanish-speaking Hispanics has slowed, according to the Center’s analysis of U.S. Census Bureau data. As a result, the share of Hispanics who speak Spanish at home has declined, while the share that speaks only English at home has increased, especially among children.

These trends are expected to continue as Hispanics born in the U.S. increasingly drive the group’s population growth, in large part due to slowing immigration from Mexico (and, to a lesser extent, high intermarriage rates). Already, most U.S. Hispanics say a person doesn’t need to speak Spanish to be considered Hispanic.