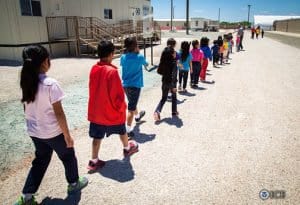 UPDATE: Mighty Writers was not permitted to deliver the books to the detention center. According to the Philadelphia Inquirer, “An ICE official told me Tuesday night that the detention center has an overabundance of books through a partnership with a local library, and recommended that the books be sent to local shelters.” However, Pennsylvania Representative, Chris Rabb stated on his Twitter, “I visited the library at the #BerksCountyDetentionCenter on Monday, most of the books were in English. I don’t know why the staff would refuse donated books.”

Mighty Writers, a nonprofit organization based out of Philadelphia donated 100 Spanish-Language books to undocumented children who have been detained in Berks County—a rural county located about an hour outside of Philadelphia. The nonprofit offers local after-school programs, scholars programs for high schoolers, and long- and short-term writing workshops in the city. The program claims that they help more than 3,000 Philadelphia kids learn to write with clarity every year.

Mighty Writers worked with national nonprofit First Book, who gave them a $3,00 grant to purchase the books. Mighty Writers founder, Tim Whitaker told Philly.com“Our hope is that this will bring some comfort to these kids, seeing books with people that look like them in a language that they can understand.”

The organization held an event where community members created 700 bookmarks with messages in Spanish for children detained across the country, including the detention center in Berks County.

“We knew that detention centers across the U.S. were deficient in reading material, particularly for Spanish-speakers,” said Madeline Karp, program director of Mighty Writers’ El Futuro location, who proposed the initiative. “A lot of the people in our community voiced that they wanted to help out, and so we quickly recognized we should do something.”