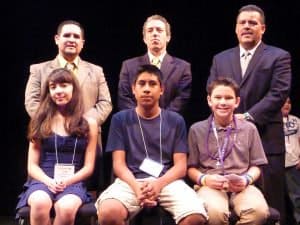 Nuñez-Peña, a 14-year-old, incoming ninth-grader from Chaparral, New Mexico, defeated 42 other contestants from eleven states, including Massachusetts, Florida, and Wisconsin, in the national competition’s eighth year.

“I feel very happy and proud of myself,” Maria commented, using both English and Spanish. “I think we all put all of our efforts into it.”

The finalists battled through local Spanish Spelling Bee competitions to represent their home states or regions.  To be considered correct, students must include in their spelling the special diacritical marks of the Spanish language, such as accents, the tilde and the dieresis. “One of the common misconceptions is that it is easier to spell in Spanish than it is in English, but it absolutely is not,” Jorge Garcia, executive director for the Colorado Association for Bilingual Education, explained to Chalkbeat during his state finals. “They don’t just memorize words. Cognitively, it’s a good exercise for them.”

Myrna Salas, news anchor for the local Univision 41, presented the all-day event and her colleague, Jorge Nuñez, joined her on stage as the pronouncer. The judges were Ana R. Acevedo, Workforce and Education Administrator for the City of San Antonio; Ofelia Gonzalez, Promotora de Asuntos Comunitarios del Consulado de México, Dr. Alpha Martinez, professor at the University of Texas in San Antonio, and Daniel Ward, editor of Language Magazine.

After three grueling hours of competition, there were 16 contestants left—two hours later, there were only three.

Alejandro De Santis, a sixth grader from St. Bonaventure Catholic School and the Archdiocese of Miami, was the first to bow out.  After five more nail-biting rounds, Lola Hernandez-Mendoza, a sixth grader from Madison, Wisconsin, misspelled estatocisto to give Nuñez-Peña from Chaparral, New Mexico and the Gadsden Independent School District, the opening to win.  Gadsden students have won the championship for six of the last eight years.

The event will move to Colorado next year.  More information about the event can be found on the website at www.nationalspanishspellingbee.com.