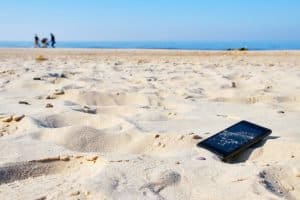 The UK’s Cambridge Dictionary has declared nomophobia, the word that describes the stress and anxiety caused by being separated from your mobile device, as the People’s Word of 2018.

For the first time, the Cambridge editors asked the public to vote for the word that best summed up 2018. They shortlisted four words that have surged in use this year, and from New York to London to Tokyo, Cambridge Dictionary users have been voting for their favorite. It was nomophobia – defined as “fear or worry at the idea of being without your mobile phone or unable to use it” – that topped the polls.

Wendalyn Nichols, Cambridge Dictionary publishing manager, commented: “We are one of the most popular online dictionaries in the world, and we have a very smart and enthusiastic global community using our free resources. We add thousands of new words and definitions every year, and we were eager to give our users the opportunity to express their views on the words that best reflected this year’s trends and events.

“Their votes tell us that separation anxiety isn’t just about what young children feel when separated from their parents any longer. It’s now also about the intimate—and often dysfunctional—relationships with our smartphones. And nomophobia gives a name to this anxiety.”

Perhaps described more accurately as an anxiety disorder than a phobia, nomophobia (a blend of syllables from “no mobile phone phobia”) appears to have been coined in 2008—not by psychologists, but by Britain’s YouGov researchers, in a report commissioned by the UK Post Office. It subsequently began to appear in UK media and has since spread around the world. Having proved its staying power, it was added to the online Cambridge Dictionary earlier this year.

Other words on the shortlist for the People’s Word of 2018 were:

destruction of the natural environment of an area, or very great damage to it

the practice of refusing someone an opportunity to make their ideas or beliefs known publicly, because you think these beliefs are dangerous or unacceptable

For more information about how the Cambridge Dictionary editors decide which new words to add to the online dictionary, take a look at the two-minute animation on their YouTube channel.