English learner students speaking Arabic tended to have lower levels of English language proficiency, while gifted and female students tended to have higher English language proficiency. Students had lower mathematics achievement when they attended a school with larger numbers of English learner students per bilingual paraprofessional, and they had lower speaking-proficiency levels when attending schools with larger numbers of students per certified ESL teacher, but these school staffing characteristics were not clearly associated with the other student outcomes studied. School climate domains were positively associated with student speaking-proficiency levels but not with most other student outcomes.

The study findings suggest further work to gain a deeper understanding of how school climate may support English learner student language proficiency and achievement; examining how specialized schools like the district’s Newcomers Academy may support positive school climate; and considering the role of staff specialized to work with English learner students. 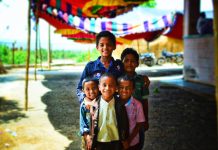 The Universal Implications of Science of Reading