With these words, the noted scholar Gloria Anzaldúa challenges educators to affirm and accept a student’s unique characteristics, to accept the language variety the student brings from home, and to build on and honor their linguistic heritage. These words emphasize that language is at the heart of how we present ourselves and how others see us (Gonzalez, 2005). Yet while the days are long gone when teachers rapped children’s knuckles for speaking Spanish or changed their names from Yu Ling to Linda, the increase in linguistic diversity across the nation requires that educators be particularly sensitive and aware of the benefits and importance of validating student language because it is fundamental to student well-being.

Linguistic diversity characterizes the US K–12 population today. In 2018, there were over five million K–12 English learners (ELs) enrolled in every state, ranging from 0.8% in West Virginia to 19.4% in California. Approximately 10% of the nation’s students bring a language other than English to class. While the majority of ELs are Spanish speakers, the top ten languages include Arabic, Chinese, Somali, Russian, Portuguese, Haitian, Hmong, and Vietnamese (NCES, 2021). What are the implications of this linguistic diversity for educators?
It wasn’t too long ago that this linguistic diversity was met with sanctions and prohibitions, formal and informal. These practices were illegal and unsound. Nevertheless, linguistic discrimination endured for generations. Today, ELs have inherited a legal framework which maintains their rights to access the core curriculum and to understand the language of instruction, yet depending upon the state in which they reside, teachers may or may not be allowed to use students’ native languages for instruction.

Linguistic discrimination, linguistic prejudice, and linguicism all refer to practices in which a negative judgement is made of a person based on their language. In 1988, the linguist Tove Skutnabb-Kangas defined linguicism as discrimination based on language or dialect (1988). Linguistic stereotyping refers to predefined negative perceptions imposed on English speakers based on their race, ethnicity, and nationality (Dovchin, 2020). Linguicism has had a long history in US English-only policy and, despite legal rulings otherwise, continues to underscore anti-immigrant rhetoric. Wiley (2019) has noted that language discrimination is often a proxy for racial animosity against immigrants.

Despite the fact that English-only policies have driven instruction for ELs, educators are pivoting to a more asset-based and inclusive perspective. A new generation of research science stresses the importance of validating young children’s native languages and the benefits of multilingualism for the cognitive, economic, and social benefits to bilingualism/multilingualism (Bialystok, 2001). Toward this goal, two recent reports, from the National Academies of Sciences and the American Academy of Arts and Sciences, summarize and underscore the importance of students’ home languages and the benefits of bilingualism for the nation.

There is no support to sustain a deficit perspective on language. The National Academy of Sciences issued a report in 2017 stating that “scientific evidence clearly points to a universal, underlying human capacity to learn two languages as easily as one… Recent evidence also points to cognitive advantages, such as the ability to plan, regulate their behavior, and think flexibly, for children and adults who are competent in two languages… there is no evidence to indicate that two languages in the home or the use of one in the home and another in early care and education confuses DLLs or puts the development of their languages at risk” (p. 3). DLLs benefit from consistent exposure to both their L1 and English in early childhood settings.

The scholars at the National Academy of Sciences have proposed a comprehensive set of research-based recommendations toward a national policy which values bilingualism for all. They state that the “culture, language and experiences of English learners are highly diverse and constitute assets for their development, as well as for the nation” (p. 2). Those who become proficient in both a home or a primary language and English are likely to reap benefits in cognitive, social, and emotional development and may also be protected from brain decline at older ages.

The American Academy of Arts and Sciences released a report in 2017 calling for a national strategy to improve access to as many languages as possible for people of every region, ethnicity, and socioeconomic background—that is, to value language education as a persistent national need similar to education in math or English and to ensure that a useful level of proficiency is within every student’s reach. Providing access to language education for all means that a national goal should be that all schools “offer meaningful instruction in world and/or Native American languages as part of their standard curricula” (p. 8). America’s Languages underscores the importance of multilingualism in a global society and states that knowledge of English is critical “but not sufficient to meet the nation’s future needs” (p. 6). Both reports stress the importance of understanding the social, cultural, and linguistic backgrounds of children as a means to achieve the condition of trust and respect necessary for effective instruction and, most importantly, to view the social, cultural, and linguistic backgrounds of English learners as assets. This research base provides the impetus for implementing an asset-based pedagogy for English learners.

An asset-based approach to teaching requires that educators abandon a focus on the limitations of and weaknesses in students and expand understanding of the strengths, assets, and funds of knowledge that students and their families possess. This requires getting to know the complexity of the EL student and community as well as the values and aspirations that EL parents have for their children. Asset-based pedagogies view the diversity that students bring to the classroom, including culture, language, disability, socioeconomic status, immigration status, and sexuality, as characteristics that add value and strength to classrooms and communities (California Department of Education, 2021). Rather than seeking to overcome this diversity, an asset-based policy requires viewing students in a new light. Asset policy recognizes that the gifts ELs bring with them can be springboards for learning.

Toward an Asset-Based Pedagogy

Leadership in today’s multilingual/multicultural schools requires a vision of language equity for the school community. Principals, as the instructional leaders, provide the context for parents, students, teachers, and staff to recognize that English and the other community languages deserve equal value, status, and importance. The following provide a few examples of asset-based pedagogy for leadership, teachers, and the curriculum.

The Principal as Language Leader

Teachers are crucial to the implementation of an asset-based approach that values the strengths of students’ identities and cultures. Creating a welcoming environment includes many activities, ranging from those as basic as learning students’ names to the complexity of developing project learning activities.

In today’s world of linguistic diversity, educators can turn away from deficit perspectives with a new view toward the benefits of bilingualism and a positive orientation toward the languages and cultures students bring. An asset-based pedagogy offers ELs a chance at a more equitable and accessible educational future.

M. Beatriz Arias is a senior research scientist at the Center for Applied Linguistics and an emeritus professor from Arizona State University. She has written and consulted extensively on educational policy and programs for English learners. Her most recent book is Profiles of Dual Language Education in the 21st Century (2018). 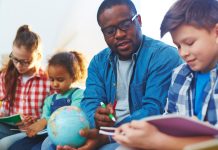