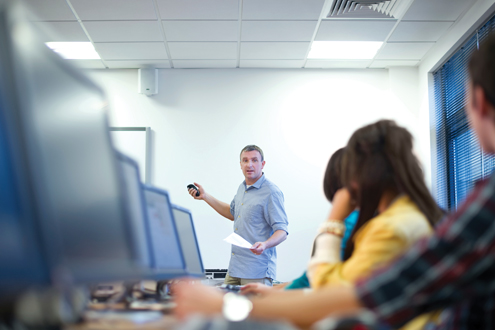 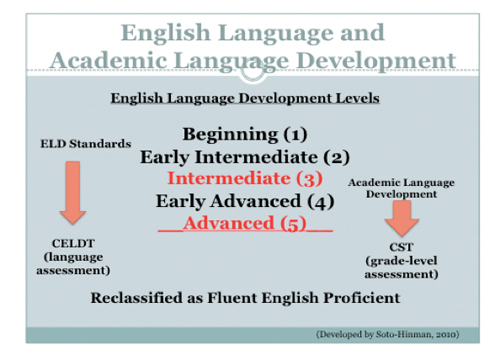 There is typically rapid language progression in the early levels of ELD, when students are learning the basics of English, social language, and forms and functions of the English language. Then, at level 3, or the Intermediate level, if ALD, or more complex vocabulary, syntax, grammar, and the register of language are not introduced, ELLs oftentimes stop making progress and can even begin to regress in language and content. Since academic language development is more cognitively and linguistically demanding, a clear definition of what ALD is and how to teach it is essential for educators to understand, so that ELLs benefit from use of strategies to enhance these components of language.
In this way, Kinsella (2007) suggests that academic language is not natural language and that it must be explicitly taught to students. She defines the essential components of academic language as: 1) vocabulary (academic and high utility words); 2) syntax (word order); 3) grammar (in context to students’ reading and writing); and 4) register (distinctions between social and academic language). In order for students to master each of these components of academic language, teachers must first understand their importance, and then be provided with specific academic language development strategies to close this linguistic and academic gap. Educators can do this by first experiencing a day in the academic language life of an English Language Learner (ELL) via shadowing, and then be taught how to embed and use academic language development strategies. Each of these strategies and approaches must be well supported with time and professional development in order to create the type of instructional change that ELLs deserve.

ELL Shadowing to Monitor and Create Urgency for Academic Language
An eye opening way for systems to see and create urgency around the academic language needs of ELLs is via shadowing, a technique whereby educators spend a day in the life of an ELL, in order to monitor their academic language experiences. After professional development on the specific academic language and active listening needs of ELLs, shadowing participants are given a profile of an ELL with achievement data (grade-level state assessment and language proficiency results), as well as a recent student picture, so that they can identify the ELL once participants enter a classroom.
Although educators have met their ELL on “paper” via the achievement data they have analyzed, including at least two years of progress on state exams and language proficiency scores, they are then asked to triangulate the data by monitoring academic language and active listening at every five-minute interval for at least two hours through ELL shadowing observations. Participants use the ELL shadowing protocol in order to monitor to whom the ELL assigned is speaking and listening.

Using the ELL Shadowing Protocol
The top portion of the ELL shadowing form (see figure below) is used for demographic data and to begin to analyze trends in the data set. For example, while transferring information from ELL profiles, the educator may notice that the English Language Development (ELD) level does not match the number of years that a student was in the country, making the ELL a Long Term English Learner (LTEL) because they have been in the system as an ELL for six years or more. Participants may also notice that their ELL has not progressed one English language development level per year, or that they have stalled out at a particular level for several years. These sorts of data talk discussions allow educators to become better acclimated with the specific gaps that ELLs in their own classrooms may be experiencing.

Once participants have reviewed the achievement data for their own ELL, they will learn to use the academic speaking and listening portion of the ELL shadowing form (see figure 3). In the first column, participants will notice that the exact time of the observation is noted at every five-minute interval. It is important that in the second column, only activities that occur at the top of the five-minute interval are documented. Anything else that occurs after the top of the five-minute interval can be added to the comments section. In the third column, observers document when students are speaking using codes 1 through 4. Codes 5 through 7 are for teacher talk only and are intended to capture moments when the student is not speaking. The type of student listening, either one-way (lecture) or two-way (dialogue), are documented in the fourth column. Additionally, modes where ELLs are either reading or writing silently and not listening, are monitored in the fifth column. Lastly, additional comments that cannot be coded by the academic speaking or listening modes are then captured in the final column. Participants proceed to capture data at every five-minute interval for two hours in this manner.

Debriefing the Shadowing Experience
Once all educators within a system have shadowed for a two-hour period of time, they congregate together so that general trends regarding each ELL’s listening and speaking needs can be examined across all of the students who were shadowed. These data should also be compared to the achievement data that were provided for participants during the shadowing training. The observation data often answer the why regarding the trends and patterns in the achievement data. These data also begin to suggest next steps for teachers both personally and within a system, which is often that more structured academic oral language development strategies must be planned for and used often within classrooms. As one teacher in LAUSD District 6, where ELL shadowing began, noted, “The person talking the most is the person learning the most, and I’m doing the most talking!”

Next Steps After ELL Shadowing
ELL shadowing is not a silver bullet. In and of itself, it is meant to create urgency around the needs of ELL students across a system. After shadowing is completed, it is essential that systems develop a systemic plan to create more opportunities for ELLs to produce academic language across content areas. Some of the schools that I work with have chosen to systemically adopt specific strategies that explicitly teach more academic language development across a school day. The three research-based strategies that I suggest are described in depth in the forthcoming ELL Shadowing as an Urgency for Change, published by Corwin Press, which discusses how to use Think-Pair-Share, the Frayer model and Reciprocal Teaching across content areas.

The figure below shows the five elements of the Frayer model process. First, the target word must be selected from a text being utilized in the classroom. It is important to note here that teachers should be very careful in pre-assessing academic vocabulary words that students, especially ELLs, actually need to learn. Oftentimes, the words that are highlighted in bold in textbooks are not the actual words that ELLs need to know. Once key academic words have been identified, the teacher will then lead students through the four steps of the Frayer model. This strategy is not a worksheet to be given to students to complete individually. Instead, the teacher will need to assist ELLs with building background knowledge (by using pictures, videos or textual examples) around the target word, so that they can complete the following four steps in the process: 1) Examples/Models – words that the student can associate with the target word in the future; 2) Non-examples — words that are not connected to or associated with the target word; 3) Visual/Picture — graphic or visual that will assist the student with remembering the word in the future; 4) Definition — together, the teacher and students create a sentence that demonstrates full comprehension of the word. Words from the examples/model section of the organizer can be used to write the final definition. 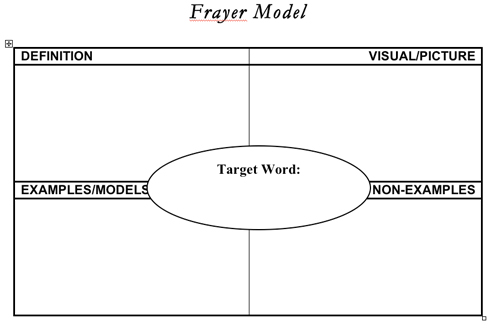 There are many other Frayer model methods and organizers that can be used to systematically teach academic vocabulary. For example, the student work sample in figure 5 shows the target word: dawdled. Instead of examples and non-examples, however, students have listed: 1) synonyms—dolly, loiter, and linger; and 2) antonyms — hurry and speed. Either approach—either examples and non-examples or synonyms and antonyms — will be a helpful approach to teaching academic vocabulary, especially when it is associated with building background knowledge around a word, discussing the target word and associated words, and building the definition with the teacher. 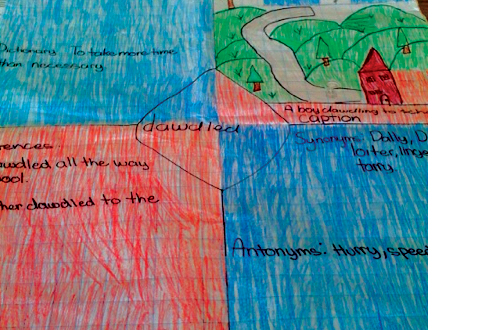 Notice in the student sample in figure 5 that the word has been defined as: To take more time than necessary; walking slowly. Additionally, the visual picture shows a student dawdling to school with the same caption below the photo. Notice that with this strategy, ELLs can now associate many more words (dally, loiter, linger, slowly, more time than necessary) with the target word by completing the exercise, which will further expand their vocabulary repertoire. The visual and joint construction of the definition will also allow students to retain the target word due to the explicit scaffolding of the word.

Conclusion
ELL shadowing, then, hand in hand with follow-up professional development on academic language development strategies, can both create the urgency for academic language change in ELL’s instruction, as well as provide teachers with the tools to begin to systemically change instructional practice. On-going support and professional development around each of the ALD strategies need to be provided. As teachers begin to embed ALD strategies into their daily practice, ELL shadowing can then also be used to monitor ALD as teachers begin to systemically elicit more language across a campus.

Dr. Ivannia Soto is Associate Professor of Education at Whittier College, where she specializes in second language acquisition, systemic reform for English language learners (ELLs), and urban education. She is the co-author of The Literacy Gaps: Building Bridges for ELLs and SELs. Her second book with Corwin Press was published in February 2012 and is titled ELL Shadowing as a Catalyst for Change. 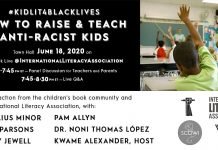 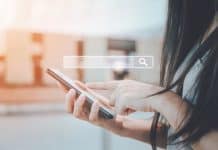 The Wonderful World of Words

Conversations with Experts in Multilingualism