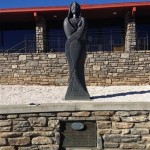 The near demise of the Cherokee language came largely thanks to the U.S. government. Most Cherokee were forced to make a brutal march from the Southeast to Oklahoma in the 1830s, but a few stayed behind, keeping a desperate grip on their way of life. In the late 1800s, officials set up boarding schools to eradicate the American Indian languages. Teachers punished students for speaking their native tongues. Now, Cherokee language immersion schools like New Kituwah Academy, located just 10 miles west of Cherokee, North Carolina, are doing their best to preserve the Native American language.

Without New Kituwah or something like it, “the Cherokee language will for sure die,” said Walt Wolfram, director of the North Carolina Language and Life Project at N.C. State University. “Lots of people remain skeptical about whether languages can be revived. But the (other) option is certain death. In that sense, Kituwah Academy is the only antidote for what will be inevitable.”

The school began teaching preschool to fifth grade students located in Cherokee and opened in 2004, meaning the first class of kids have recently finished the available curriculum. This January however, the tribal council decided to extend the program to grades 6-12. In the earlier grades, classes are taught only in Cherokee, and as the students advance English is introduced in order to put a greater emphasis on the Cherokee language. “That’s a big thing to hold on the shoulders of kids, that they’re carrying the language,” said Kyle Crowe Shuler, principal of the private school operated by the tribe. “And I don’t want to beat that on them. I want them to enjoy it. And I think that they do.”

Kevin Tafoya, a father of two children currently enrolled in at New Kituwah says that the language is “probably only the last real thing about being Cherokee that we have left. I mean, we have our different arts and stuff. But I think our language really defines us as it does any people. We’re singing our songs again,” he said. “We’re telling our stories. And the one thing that we have is hope.”