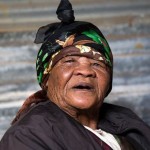 N|uu is the language of the San people, who were the first hunter-gatherers in southern Africa. The language has 112 distinct sounds including 45 characteristic “clicks” and has been passed down orally for generations. Due to its critically endangered state, linguists are working with the last three living speakers of N|uu to design alphabet charts in an effort to preserve the ancient African language. “It’s the most indigenous language of southern Africa,” Matthias Brenzinger, director of the Centre for African Language Diversity at the University of Capetown, told The Guardian. “Very often [white settlers] kept the young girls, but they killed all the men. Genocide is the major reason for these languages in southern Africa to be extinct now, and then forced assimilation. Farmers were taking their land so there was no subsistence for them any more.”

“With these languages, you never know,” Brezinger continued. “Hawaiian was extinct basically, and then there was a movement 35 years ago and you have 2,000 mother tongue speakers of Hawaiian. This is why it’s very important now for us to record as much as possible with the speakers so we have material, spoken language on video tape and so on.” Hanna Koper, who is 95 years old and one of the last remaining native speakers of N|uu, and her two siblings are working to preserve their culture and language. Koper told South Africa’s Sunday Times newspaper what she remembered; “We were told not to make noise and the baas [a Dutch word for supervisor] would shout at us if we spoke the language because they believed we were gossiping.” In one of the audio samples, Magdalena Kassie, who passed away not long after recording, said, “What is our land without a language? We want our language back just as we have now won our land back. I feel the one does not go without the other.”