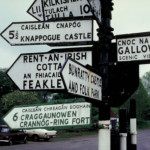 Irish language fluency was a requirement for anyone appointed to civil service positions in the Republic of Ireland until the Language Freedom Movement in 1974, which required proficiency in either of the country’s official languages (Irish or English). In 1985, a study commissioned by The Irish National Teachers’ Organization found that the public was almost evenly divided on whether or not the Irish language, also known as Gaelic, should be taught to children in public schools. Teachers were overall enthusiastic about including the language in their curriculum, but felt that the general public was not interested in its revival. In 2003, the Republic of Ireland’s government enacted the Official Languages Act, which promotes the use of the Irish language through mandating Irish language translations on all signs and documents and is part of a plan to have at least 250,000 speakers of Irish by 2030. The current estimate is between 40,000 and 80,000 native speakers. Hundreds of millions are spent each year trying to sustain the use of Irish, and just a few weeks ago President Michael D. Higgins made a request for the Irish people to do more for their language saying, “Déanaimis iarracht níos mó ar son na Gaeilge.”

Julian de Spáinn, secretary general of Conradh na Gaeilge, publicized a call to action to save the Irish language in The Irish Times, “The Government must provide the resources required to implement a creative, courageous and comprehensive policy which includes the following elements: First, a Gaeltacht education policy that ensures our education system facilitates native speakers. […] Second, adequate funding for Údarás na Gaeltachta and the new community language planning system in the Gaeltacht. […] Third, substantially increased support for Gaeltacht groups that empower their members to use their native language and develop their communities.” Many argue that mandatory Irish language class for children in schools is the wrong idea. Some alternatives in the works include Irish language summer camps in areas where there is more of a drive to learn and preserve the language. While it is true that one cannot get around Dublin only speaking Irish, in areas like Gaeltacht where the language is still spoken daily to some extent, preservation is much more feasible.