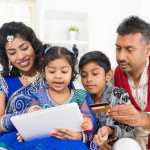 India is now the second-largest online market in the world, but the Internet in India is predominantly an English only medium. Only 10% of India’s population speaks English, and, in an effort to promote digital literacy and safety in India, Prime Minister Narendra Modi announced the government’s Digital India Program, under which Google will increase the availability of information in Indic languages and help approximately 20 million small businesses establish a presence on the web. “Many of the next 100 to 200 million Indians who come online won’t speak English,” said Google Vice President and Managing Director for South East Asia and India, Rajan Anandan. “So, we have been working with 30 partners on the Indian Language Internet Alliance (ILIA) to make the web more useful to Indic language speakers.”

Information inequality is a large factor in the world’s growing digital divide. 30% of online content is in English, and the rest is dominated by a list of nine other languages; Chinese, Spanish, Arabic, Portuguese, Japanese, Russian, German, French, and Malaysian. Cultures are becoming more aware of Google’s power over digital content and in turn the usage and sustainability of languages. Anandan elaborated on the challenges of collaborating with the Indian government while working on the Digital India Program, telling India Today, “We need to set aggressive timelines for the ambitious projects […] Becoming a true broadband nation should be a key priority. We also need to arrive at clearly defined processes and guidelines that are aligned with global trends and international standards for entrepreneurs to truly achieve India’s full potential.”