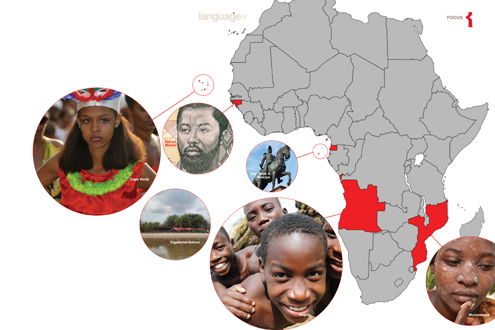 Brazil may be the Portuguese powerhouse, but the language is still alive and well in Africa

With a population of just 10 million people, Portugal has seen its language go global thanks to the dynamism of its ex-colonies. Portuguese’s status as the sixth-most-spoken language in the world is a direct result of Portugal’s empire, which owed its power and riches to the transatlantic slave trade, the massacre of indigenous populations, widespread cultural repression, and other atrocities characteristic of colonialism. Brazil separated from the empire without a war when the emperor’s son declared the South American giant to be an independent entity and appointed himself the Brazilian emperor. However, Angola, Guinea Bissau, and Mozambique fought horrific wars that did not end until the Portuguese military coup in 1974. The lusophone countries of Angola, Cape Verde, Guinea Bissau, Mozambique, and São Tomé e Principe were the last African nations to achieve independence from European colonizers. Despite hundreds of years of violent colonial relations with Portugal, these nations all adopted Portuguese as their official language and collaborate with Brazil, Portugal, and East Timor to make up the Community of Portuguese Language Countries (CPLC). The CPLC aims to foster diplomacy and political cooperation among member states and to promote the Portuguese language.

Some of the major actors who fought for decolonization and founded the independent African countries have spoken about why they chose the colonial language as an official language. Former prime-minister of Angola Fernando França Van-Dúnem remarked that adopting Portuguese as an official language “occurred naturally,” and former president of Cape Verde Pedro Pires asserted that Portuguese was “the most practical solution” for the newly independent nations.

“It was the only tool we had available, and we had to use it,” Pires explained. “The language served as a medium for communication, to spread the culture, and actually it had to be this way. We had no other language. It was the most practical solution, because the language is written and it was the language we used in school.”

Although Portugal’s former colonies in Africa boast a variety of indigenous languages, Portuguese was already the language of education and therefore the language of the elite. Furthermore, it was the common language among nationalist leaders from the newly independent countries. In addition to standard Portuguese, Portuguese-based creoles are also prevalent in the lusophone African countries. However, many creoles lack a written form, and those that have a written form are marginalized in education, literature, and journalism.

Today, Portuguese is also an important language for business, particularly in the oil, coal, natural gas, and other mineral industries. Having the second-largest oil reserves on the continent, Angola, and in particular its capital city of Luanda, attract multinational corporations and scores of expatriate oil-field workers amongst whom Portuguese is the common language.