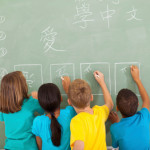 In the wake of university student protests against multilingual instruction in South Africa, the South African education system announced plans to implement optional Chinese language classes in schools. The Chinese language is the latest of about a dozen new languages proposed for South Africa’s education system, including German, Serbian, Italian, Latin, Portuguese, Spanish, Tamil, Telegu, and Urdu. China and South Africa recently signed an agreement that identifies five ares of cooperation, including curriculum development, mathematics and science, teacher training and research, and development in basic education, as China is now South Africa’s largest trading partner. Last year, a public opinion survey showed that South Africans have mixed feelings about China, and teachers unions are speaking out. “We’ll oppose the teaching of Mandarin in our schools with everything that we have,” the country’s largest teachers union told Mail & Guardian Africa. “We see it as the worst form of imperialism that is going to happen in Africa,” the group’s general secretary, Mugwena Maluleke said.

To strengthen education and policy ties between South Africa and China, the plan details a 10-year plan to make Mandarin classes available for grades four through nine next year and slowly expand the programs to earlier and later grades. It has been speculated that the Chinese government will provide support for training Mandarin teachers. South Africa currently has 11 official languages and currently students must study at least two in school. Critics of the new policy argue that South Africa is failing to protect its native languages and many are against the governments close relationship with China. However, other African countries have the same idea, with Kenya to possibly offer Mandarin languages classes in 2017 and Nigeria following suit.