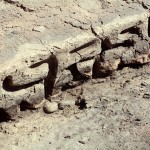 2,700-year-old inscriptions found by archeologists at the ancient site of Grakliani Hill in Georgia places prehistoric Georgia as one of the first civilizations to use written language. The writing was discovered on the altars of a 7th century BC temple dedicated to a fertility goddess. “The writings on the two altars of the temple are really well preserved. On the one altar several letters are carved in clay while the second altar’s pedestal is wholly covered with writings. The inscription is so important, that goes beyond the limits of Georgian science and will be the subject of an international study. The new discovery will change the particular stage of the history of the world’s manuscripts,” said Vakhtang Lichelo, head of the Institute of Archaeology of Georgia’s State University.

Archeological excavations of Grakliani Hill began in 2007. Since then, archeologists have been excavating the uninterrupted 300,000 year history that the site maintains, from the Stone era to the Antic period. Various weapons, tools, and icons of worship have been discovered in the ten layers that have been excavated, the most significant of which was arguably a 4th century BC printing device. The discovery of the ancient script however, will attract much more attention. “The discovery is very likely to change Georgian history and will seriously attract international interest,” said Georgia’s Minister of Culture Mikheil Giorgadze. The site will become an open air museum for interested visitors, displaying the location’s multiple layers of history.