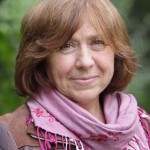 Svetlana Alexievich was awarded the 2015 Nobel Prize in Literature last month, and three countries claimed a piece of her success. Headlines across Eastern Europe called her a “representative of Russian literature,” a “writer born in Ukraine,” and a “Belarusian writer.” In Ukraine, President Petro Poroshenko, the first politician to congratulate Alexievich, wrote: “Wherever we are, whatever language we speak or write—we always remain Ukrainian.” The award generated mixed opinions in Belarus, with some political activists and literary critics questioning Alexievich’s Belarusian identity because she writes in Russian, even though about 70% of the country’s population speaks Russian at home. In Russia, some disowned the writer for criticizing Putin’s policies and called the decision political.

Alexievich’s biography speaks to the fluid borders and complex identities in post-WWII Eastern Europe. The writer was born in 1948 to a Belarusian father and Ukrainian mother in what was then Soviet Ukraine, but had been in Poland and under German control during World War II and is now the city of Ivano-Frankivsk in Ukraine. Her family then moved to Belarus, where the writer grew up, studied, and worked. When asked about her choice to write in Russian, Alexievich explained, “I am writing about a man-utopia, a red person. This utopia lasted for 70 years; another 20 years are spent on getting away from this utopia. And this utopia spoke Russian.” She is the first Belarusian writer to receive the prize, which places her next to such world-renowned writers as Ernest Hemingway, Gabriel García Márquez, and Albert Camus.