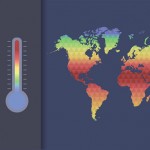 According to new research by linguists from the University of New Mexico and Laboratoire Dynamique du Langage-CNRS in France, the characteristics of languages have a lot to do with the climate and topogrophy of the environment they emerged in. The study is a more in depth approach to analyzing why tonal languages seem to come from hot and humid places. The researchers analyzed a database of approximately 600 languages, excluding English, Spanish, and Mandarin due to the difficulty in examining how widespread languages are directly effected by their environments. “We believe this work is by far the most extensive and careful work on a possible link between specific aspects of human languages’ sound patterns and environmental factors,” said Ian Maddieson, a linguist at the University of New Mexico and the study’s primary researcher.

The study focuses on the theory of acoustic adaptation, which details how the natural environment can influence the types of sounds produced by local animals and humans. “Now, within a single species of bird, they’re finding that the birds that live in cities with a background noise of cars, etcetera, are singing in higher pitch notes than birds that live in rural areas,” Maddieson said. “The birds are adapting to the traffic noise. This is really more what we’re talking about with humans. The same species adapting to their environment.”

Maddieson says that environmental factors such as air quality, air temperature, weather, and the density of foliage all can effect the acoustics of language. “The transmission of sound waves consists of the propagation of small pressure differences through space in a medium such as air. For the most faithful propagation of sound waves, the medium needs to be uniform, otherwise some distortions will occur,” Maddieson explained. “That could explain why languages in areas with greater tree cover tend to be less ‘consonant-heavy. Environments in which higher frequencies are less faithfully transmitted may favor greater use of sounds characterized by low frequencies, that is, more sonorous sounds.”