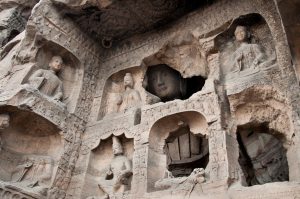 After six years of research, archeologists have confirmed that inscriptions found among cliffs in the Hunan Province are of the Miao language. Miao is a language of the ethnic minority in China that today is spoken only, whose written language is only known through folklore and Miao folk songs. According to Shanghai Daily, Archeologists claimed the characters were carved during the Ming (1368-1644) and Qing (1644-1911) dynasties. The Miao is actually a non-homogenous group of people that the Chinese government has grouped together, recognized by the government of China as one of the 55 official minority groups. Although they are a linguistically-related ethnic minority in Southwest China, their makeup is diverse. Their history is also deep in china, as according to André-Georges Haudricourt and David Strecker, the Miao were among the first people to settle in present-day China.
Archeologists have been conducting research on over two-hundred cliff carving sites along river valleys in Chenbu Miao Ethnic County since 2010. They have concluded that the characters and symbols may be records of the life, agriculture, and religious beliefs of the early Miao people.