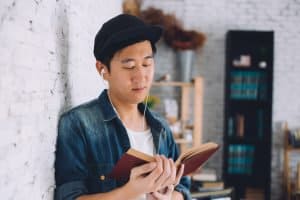 Research proves that a good book stimulates the brain

Just in case anyone needs another reason to encourage the reading of literature, researchers at Stanford University have come up with more proof that it’s good for you. In an innovative interdisciplinary study, neurobiological experts, radiologists, and humanities scholars are working together to explore the relationship between reading, attention, and distraction with the help of Jane Austen.

Surprising preliminary results reveal a dramatic and unexpected increase in blood flow to regions of the brain beyond those responsible for “executive function,” areas which would normally be associated with paying close attention to a task, such as reading, said Natalie Phillips, the literary scholar leading the project. During a series of ongoing experiments, functional magnetic resonance images track blood flow in the brains of subjects as they read excerpts of Jane Austen’s Mansfield Park. Experiment participants are first asked to leisurely skim a passage as they might do in a bookstore, and then to read more closely, as they would while studying for an exam. In both instances, Philips noticed an increase in blood flow that exceeded “just work and play.” In the case of more critical reading— the type you’d engage in while writing an essay or preparing for a test—blood flow increased beyond executive function regions, or those areas responsible for problem-solving.

Phillips said the global increase in blood flow during close reading suggests that “paying attention to literary texts requires the coordination of multiple complex cognitive functions.” Blood flow also increased during pleasure reading, but in different areas of the brain. Phillips suggested that each style of reading may create distinct patterns in the brain that are “far more complex than just work and play.” So both leisurely reading and close-reading benefit us neurologically. The experiment focuses on literary attention, or more specifically, the cognitive dynamics of the different kinds of focus we bring to reading. This experiment grew out of Phillips’ ongoing research about Enlightenment writers who were concerned about issues of attention span, or what they called “wandering attention.” This research is “one of the first fMRI experiments to study how our brains respond to literature,” Phillips said, as well as the first to consider “how cognition is shaped not just by what we read, but how we read it.”

Critical reading of humanities-oriented texts are recognized for fostering analytical thought, but if such results hold across subjects, Phillips said it would suggest “it’s not only what we read — but thinking rigorously about it that’s of value, and that literary study provides a truly valuable exercise of people’s brains.” Though modern life’s cascade of beeps and buzzes certainly prompts a new kind of distraction, Phillips warned against “adopting a kind of historical nostalgia, or assuming those of the 18th century were less distracted than we are today.” Many Enlightenment writers, Phillips noted, were concerned about how distracted readers were becoming “amidst the print-overload of 18th-century England.”