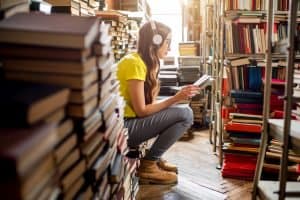 Many of us choose to end the day curled up in bed with a good read, and as technology revolutionizes the publishing industry and convenient, sexy e-readers replace bulky, paper-cut-inducing books, more and more of us take a gadget as a bedfellow— but a new study suggests that paper books are better in bed. Light-emitting e-readers have detrimental effects on the circadian rhythm, or body clock. According to researchers, evening use of light-emitting e-readers suppresses the release of melatonin, harms sleep quality, and even affects next-morning alertness.

Assistant professor of biobehavioral health at Penn State, Anne-Marie Chang, explained, “Electronic devices emit light that is short-wavelength-enriched light, which has a higher concentration of blue light — with a peak around 450 nm — than natural light.”

“Our most surprising finding was that individuals using the e-reader would be more tired and take longer to become alert the next morning,” remarked Chang. “This has real consequences for daytime functioning, and these effects might be worse in the real world as opposed to the controlled environment we used.”

According to the 2011 Sleep in America survey, 95% of people in the U.S. reported using some sort of light-emitting device, such as computers, tablets, and cell phones, within the hour before bedtime. In the same survey, 63% of Americans expresses dissatisfaction with their sleep during the week.

“We live in a sleep-restricted society, in general,” said Chang. “It is important to further study the effects of using light-emitting devices, especially before bed, as they may have longer term health consequences than we previously considered.”