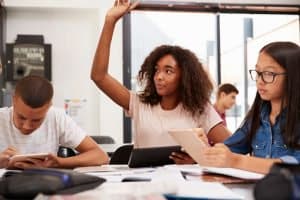 Despite a push to train and recruit more bilingual teachers, school counselors, and school administrators, the US is facing a shortage of educators who can support issues relevant to English language learners.

English language learners — often called ELL students or ELLs — are the fastest-growing student population group, according to the National Education Association. By 2025, an estimated 25 percent of public school students will be ELLs. While the numbers suggest these students are no longer the outliers in today’s schools, a look at their support resources suggests otherwise. There were more than 4.6 million ELL students in public schools during the 2015-16 school year, yet only 78,000 teachers dedicated to addressing their needs.

The number of ELLs in today’s public schools continues to rise, and so does the demand for those who can teach them. With that kind of growth in a single population, how can it be so difficult to find bilingual educators?

Experts cite a number of reasons for this gap, including a lack of robust educator training, insufficient salary bands, and the overall growth of the ELL population. However, what’s most apparent is a significant, systemic issue on both sides: society’s perception of students of color.

“We tend to ‘otherize’ [English language learners] … because we think, ‘Yeah, they’re the other kids,’ right? But if we think about it in terms of a global scale, they’re the future of this country,” said Gigliana Melzi, a professor at [email protected]

Who are English language learners?

English language learners are students whose primary, native language is a language other than English. According to federal statute, ELLs are identified as students who demonstrate a sufficient difficulty in reading, writing, speaking, or understanding the English language: a challenge that “inhibits their ability to learn successfully in classrooms where English is the language of instruction or to participate fully in the larger US society.”

ELL students are most likely to attend urban schools, according to Colorín Colorado, an online resource for educators and families of English language learners, but their populations are growing rapidly in rural and suburban districts as well. This increase in ELL students, especially in public schools, means an increase in language diversity across the US. According to the Migration Policy Institute, the majority of ELLs speak Spanish, but not all ELLs are Spanish-speaking students. While 85 percent of language diversity in today’s public schools comes from the eight most common languages — Spanish, Arabic, Chinese, Vietnamese, Hmong, Somali, Russian, Haitian — there are over 300 languages spoken in US public schools.

However, this language diversity often goes uncelebrated in today’s classrooms.

“These children are often highly intelligent and highly motivated,” said Kenneth Patterson, a teacher leader at Woodmoor Elementary School in Baltimore, Md. “The language is a barrier, not their intellectual capacity.”

It’s important for schools to be thoughtful and capitalize on students’ strengths – rather than condemning student differences.

“We need to start developing bilingual programs so that children are learning both languages,” Melzi said. “Oftentimes what is happening is that we’re focusing only on their lack of English skills and then forget that they have a lot of academic knowledge in their first language.”

However, research shows there is a gap between the thoughtful, robust programs needed for ELLs and the resources available in today’s public schools. A 2016 report from the Department of Education noted that over half of the US has a shortage of educators certified to work with English language learners. A recent report from the National Academy of Sciences  echoes the same concerns.

A 2017 report from the National Academies of Sciences, Engineering, and Medicine External link  found that teachers who work with English language learners are often underprepared for the job.

“We need to try and educate all teachers to be prepared to teach to the diverse group of children that make up the United States,” Melzi said. “It goes back to this idea that we’ve seen the kids as they need some kind of ‘special support’ rather than [the idea that] all teachers should be prepared to deal with all children.”

Legislators are attempting to acknowledge this gap. Earlier this year, a collection of Democrats in Congress introduced the Reaching English Learners Act.

Schools don’t need to wait for legislation, though. Patterson says that shift can happen from inside the school community.

“There must be a strategy focused on second language acquisition, both highlighting the need for bilingualism in our growing global context, as well as the need for more open-mindedness and appreciation for contributions to world progress through other countries and languages,” he said.

The move toward a world that supports and celebrates bilingualism starts in the classroom. Rather than “otherizing” these students, as Melzi says, educators should ensure that their classrooms and schools are culturally responsive learning environments.

As schools become increasingly diverse, a recent American School Counselor Association journal article says it is important for school counselors to be “intentional in assuring they can equitably serve all students,” including those who are ethnically and culturally diverse.

Patterson, along with other classroom teachers, offers two primary strategies for how schools can create culturally responsive learning environments that support the unique needs of English language learners.

Don’t start from zero.  Students whose first language is not English are not automatically at a disadvantage, and culturally responsive teaching is not a “remedial strategy.” This negative mindset is damaging, Patterson said.

“We must begin with the belief that every student is already a genius and more than capable of shining,” Patterson said. “It is our responsibility to do the work of sifting through the cultural barriers and finding the pathways to awaken this genius.”

Embed cultures into the curriculum. Students’ populations should be reflected in educators’ work. Visible efforts to welcome and embrace ELLs “shortcut the connection of the student to the classroom,” Patterson says, and shows them they are celebrated and welcomed.

One way to do this is to begin a book club based on books the students like to read, suggests Keila Foster, AVID coordinator for the Maryland public school system. AVID is a school-based college and career readiness program that prepares high school students for success. Allowing English language learners to be a part of the planning and learning process enables their culture to shine from the literature they suggest.

Blair Mishleau, director of personalized learning at Western School of Science and Technology in Phoenix, Ariz., suggests programs like Readworks, Colorin Colorado, DonorsChoose, and FirstBook as accessible tools for educators looking to bring culturally relevant books into their classrooms.

At its core, the key to providing English language learners with school support is simple, Mishleau said.

“Ensure that your curriculum has many windows and mirrors,” he said. “Windows being perspectives into lives different than your students; mirrors being reflections of their lives.”