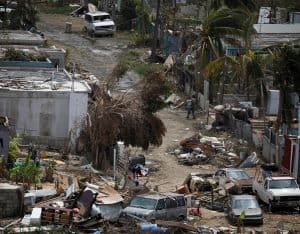 For years before Hurricane Maria’s direct hit devastated much of Puerto Rico’s infrastructure in a matter of hours, the officially-bilingual U.S. territory’s economy had been in freefall and was subject to strict austerity measures imposed by the U.S. (and its bankers) which had caused schools to close and a mass exodus of the island’s youth.

Puerto Ricans are U.S. citizens but it has no representation in the Electoral College, so its people cannot vote in general presidential elections. It has one delegate in the House of Representatives who serves on and votes in committees but cannot vote on the House floor; that position is currently held by Jenniffer González-Colón, a Republican.

Puerto Rico pays taxes to the U.S. In 2011, Puerto it paid $3.3 billion in taxes to the U.S., more than some states, in the form of Social Security, payroll, import, export, and commodity taxes. Most people in Puerto Rico do not pay federal income taxes, but they do pay local income taxes, which are often higher than what federal income taxes would be. Although Puerto Ricans pay into the U.S. Medicare, Medicaid, and Social Security systems, they cannot collect the same benefits as citizens in the 50 states, which shifts more of their health care costs onto the territory’s government.

Since the recession on the island started 10 years ago, nearly half a million people (about 12% of the total population) have left to work in the U.S. Many of those who have left have young families with children, so the school-age population has plummeted, adding pressure for education cuts on an already strained system.

Last year, the U.S. Court of Appeals for the First Circuit ruled (Puerto Rico v. Franklin) that the territory and its municipalities could not declare bankruptcy unlike states of the union, so a financial austerity plan was imposed under the Puerto Rico Oversight, Management and Economic Stability Act of 2016 (PROMESA) which created a board to oversee fiscal restructuring in Puerto Rico. President Obama appointed the seven members of the board, which overrides the constitutional powers of Puerto Rico’s government by taking fiscal control. The board has called for the closure of more schools and other education cuts.

It’s worth noting that a month before the U.S. entered World War I, Woodrow Wilson granted citizenship to Puerto Ricans and then started drafting them to help with the war effort. Currently, more than 10,000 active duty military personnel from Puerto Rico serve across the branches of the U.S. Armed Forces (Puerto Rico Federal Affairs Administration).  Since 1917, more than 200,000 American citizens from Puerto Rico have served in the U.S. Armed Forces, serving in every conflict since World War I (Puerto Rico Federal Affairs Administration).

Without a federally-backed investment plan to not only rebuild the island’s infrastructure but also revamp its basic human services (like schools, communications, and hospitals), and replant its crops (of which about 80% have been destroyed), the only option for residents will be mass migration to the U.S. This will not only be disaster for the island and its heritage, but it will create an immigration strain on the U.S. that it is not likely to accept in the current political climate. The pragmatic solution is to grant Puerto Rico statehood and funnel investment into the island so that its people can benefit from the contributions that they have made to the U.S. for over a century.